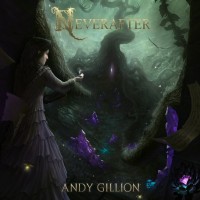 
If you thought you heard all that the amazingly talented lead guitarst Andy Gillion has had to offer in Mors Principium Est, then you should think again, because his highly skillful musicianship will surely blow your mind with this impressive solo debut NeverAfter.

The concept of this album tells the story of a young girl named Aria, who journeys through a dreamworld in search for her resolution after the loss of her mother. All that is left of her mother's possessions is a music box that failed to sound ever since her tragic fate. While in her deep sleep, Aria goes in search of that lost melody that has been haunting her in her dreams ever since, so she can eventually find happiness once again and finally be set free.

Now you know the background of the story, let's talk about the way he structures this storyline into a musical concept. Andy's songwriting is certainly excellent, and he also delivers this fantasy concept very well, with the use of amazing synth work, and of course his incredible guitar skills. With all the elements perfectly in place, he manages to create a dramatic, almost futuristic soundscape, He does, however, have help in doing so along the way by featuring well esteemed musicians such as Arch Enemy guitarist Jeff Loomis, who features on the song "Skyless", Christina Marie as vocalist on the song "Aria", and Paul Wardingham featuring on the song "Hiraeth".

This album is mostly instrumental-based and structurewise is clearly done in a progressive style; the way in which this album flows would suggest that, as the tempo, rhythm and overall vibe alter dramatically in parts through out the album, especially as you hit the soft, short interlude "Lullaby", which then quickly swings back round to the much faster tempo closing title track. Although there's an element of progressive writing in the song structures, you would be wrong to think of this album as excessively technical and complex; it's actually very melodic, as the riffs, although heavy, contain hooks throughout the entire album, and are easy listening on the ears. From the riff style, you can hear Gillion's early melodic death metal influences, which has been clearly influenced from his time with Mors Principium Est.

His shredding solos aren't just fast and complex, they have great rhythmic melodies and are truly memorable. The drumming performed by session drummer Samus Paulicelli is also very nicely done; it's very rhythmic but not too complex, and he gets the job done and done well. The synth work too is very well thought out and not overdone; it's mixed and mastered very well into the structure, and never does he allow the synths to outshine his outstanding guitar work.

If this impressive debut NeverAfter is anything to go by, then I think it's fair to say Andy Gillion's solo project is really going to go places, especially with this outstanding performance and array of talents he shows. I would even go as far to say that Andy Gillion deserves his place and name to be mentioned in high regards amongst the great instrumental solo acts in and outside of metal, and as a guitarist I would say he deserves his position alongside Joe Satriani, Yngwie Malmsteen, and Buckethead.