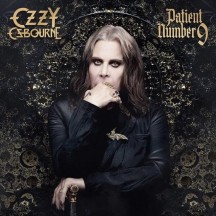 
Well, it's better than Ordinary Man at least.

When reviewing an album from a respectable artist at this age, you always get the lingering feeling that you might be reviewing their final album. It's easy to have rose tinted glasses after an artist's death when looking back at their final record, but it's weird to do it before. When I reviewed Ozzy's previous album, Ordinary Man, it felt more like a celebration of the man's entire career and place in the world rather than talking about the actual album, because nobody wants to be the one who thrashes the final album. Especially with how many health scares related to Ozzy were made public around the time. Well, Ordinary Man was not Ozzy's final album. And there's a part of me who feels compelled to review Patient Number 9 simply because now this is the one that could be the final one. But then maybe he'll come out with another one in two years, and I'll look like an absolute fool. I don't want Ozzy's perseverance in his age to feel like it's going contrary to my reviewing plans.

That said, I'm glad Ordinary Man isn't Ozzy's final album. Ordinary Man and Patient Number 9 have quite a lot in common, for better or worse, and it's not like there were not any good songs on Ordinary Man, but I really didn't feel compelled to revisit it past the title track. As a whole, Patient Number 9, despite being ten minutes longer, feels like the more whole product. Filler is still abound, as I can only assume the health scares got Ozzy to wanna make as much music while he still can, but that has always been the case with Ozzy's albums. I'll be frank and say that retroactively I don't really love any Ozzy album, as much as I do love some songs on Blizzard Of Ozz or No More Tears, but none of his solo albums I'd call masterpieces. I'm not saying that to say that Ordinary Man or Patient Number 9 are closer relatively to those albums than initially assumed, but inconsistency is pretty much just modus operandi. If I were to claim that this is the best Ozzy album of the 2000s, that could be true, but also not that big of an achievement.

As far as similarities with Ordinary Man go, the production is sterile, the autotune is awful, Andrew Watt is definitely the least interesting guitarist on this record, even if he's probably more responsible for this record's existence than people may give him credit for. Despite those flaws, the one thing that does feel interesting about both records is the guest list. While Ordinary Man was pretty hilarious in the artists that it got added to metal sites, like Charlie Puth, Post Malone, and Travis Scott; Patient Number 9 also adds some interesting artists to metal sites, but they're ones adjacent enough that it makes more sense, from blues rock guitarists like Eric Clapton and Jeff Beck to the late Foo Fighters drummer Taylor Hawkins. Not only that, but some characters from Ozzy's journey make their return: Zakk Wylde, Robert Trujillo, and most importantly Tony Iommi. There's even more interesting characters in the credits, but read those in your own time, I don't want this to be a Wikipedia article.

And I think this is the reason why Patient Number 9 works better than Ordinary Man did. It feels like an album made by people who know what an Ozzy album should feel like. It has guitar moments that are actually interesting as opposed to the lackluster Ordinary Man, and even though I wish some blues influences were stronger than just the brief solos by the two guests, they add quite some nice nuance that works with what Ozzy is doing. With Black Sabbath's dissolution still feeling recent enough, it's comforting to know that all four original members of the band are still currently alive, and hearing two of them play here (and on stage) is quite a joy. Sure, a lot of my enjoyment is just nostalgia bait, but it works. For all its shortcomings, Patient Number 9 is actually a worthwhile record.

If the worst happens, this is a more fitting end to Ozzy Osbourne's journey than Ordinary Man was. But at this point I wouldn't be surprised if he just went on to live forever.

Written on 18.09.2022 by
RaduP
Doesn't matter that much to me if you agree with me, as long as you checked the album out.
More reviews by RaduP ››