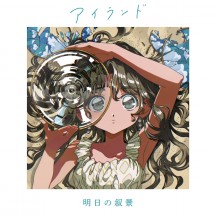 
A couple of years ago, when I reviewed tricot’s 10 for our nonmetal series, I noted the propensity of Japanese alternative artists to dissolve the borders between indie, math, alt, and pop rock for effortless amalgamations of texture, atmosphere, complexity, and feeling. Asunojokei strays somewhat far from that exact sound profile (there’s no black metal in tricot), but the sensation created is the same.

The fusion of black metal and shoegaze no longer has the tantalizing allure of controversy – as a society, we’ve come a long way since Sunbather – and I often find we’ve pitched over to the other side and started to economize with the sound; quite often the blackgaze I encounter makes for a fetching amusement that lasts for only the 40-odd minutes of its duration. It’s not really my style, I suppose, so perhaps that’s no surprise. I prefer gazing at the television. I’ll always set aside some time for the latest Astronoid or Sylvaine (and Alcest, obviously), but it takes something a little special to get me out of bed for a name I don’t recognize.

That’s where the tricot comparison comes in. While there may not be much in the way of superficial sonic similarity to artists like them or to Polkadot Stingray or Lie And A Chameleon – these comparisons are more for structural illustration – I think it’s clear from the way Asunojokei incorporates their disparate light/dark, hard/soft, and complex/simple dichotomies that they are heirs to that selfsame tradition of texture mixing. Sure, you’ve heard extreme metal infused with shoegaze and hardcore before, but not quite this downy soft and playful; those crushing riffs and screamed vocals are dispersed by the constant tonal and rhythmic shifts into laidback feel-good rock, neither as hostile as its techniques might suggest, nor as inert and passive as the full atmospheric bath that shoegaze can easily achieve. The festive rhythms of “Chimera” hidden within blastbeat bouts and the J-rock chord progressions lurking beneath volatile core riffs in “The Sweet Smile Of Vortex” should indicate why Asunojokei ought to be distinguished from your average Deafheaven.

アイランド (Island), appropriately for its title, unfolds in lazy summer ambience described by the light canopy of tremolo picking and the fast but subtle chord changes of upbeat indie rock; the blends explored by tracks like “Diva Under The Blue Sky” have a slightly mathy bounce, although the album discovers its brutal side with increasing frequency as it progresses, leading to absolutely destructive breaks in the later tracks. Many of the guitar melodies have the unmistakable flavor of melodeath, but delivered with that gauzy math rock jangle, adding an unusual sweetness to the harsh edges otherwise typified by black metal and hardcore. The transition from the afternoon nap of “Gaze” into the intense melodeath force of “Footprints” is a fantastic harnessing of the band’s dynamic flexibility, another great example of the personality that has earned Asunojokei more than mere polite attention.

The vocals possess a vein of screechiness reminiscent of late-era Chuck Schuldiner, a pleasant but curious addition to the kaleidoscope of sounds nesting on Island, and very often it is these screams alone that separate the album from something much more tranquil. There is a parallel universe in which all of these songs are sung by an effervescent chipmunk and are used as the openings for your favorite idol-themed animation, and it does interest me to ponder how much the vocals alone could change the orientation of the album. Even with the occasional chugs and frantic drumming, Asunojokei frequently find themselves within a register of calmness that deviates from the common sensations of “bliss” (as Radu would say reluctantly) or bittersweetness that seem to serve as the two modes of calmer atmosphere in most metalgaze. This is bright, estival, energetic, clean – immersive, but not lazy; cool, but not always casual.

Summer’s very nearly over (though it wasn’t when Asunojokei released this album, so that’s on me), but there’s still time to sneak in something that will capture the season’s more appreciable qualities (no blistering sun to be found here; that’s for sure).