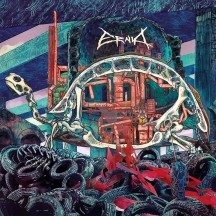 
Ernia have successfully reached out to so many styles of grindcore that they came up with a powerhouse of an album as colorful as its artwork.

Grindcore can be a pretty forgiving genre. Unlike other genres, it is easier to get away with little originality as long as the result is properly pummeling. The short length of the songs/albums combined with the energetic frenzy of riffs and blastbeats is an ideal combo for a simple yet serviceable album. This is precisely why it’s so refreshing to discover a band that says “fuck comformity; let’s combine, let’s elevate, let’s push it further!”. This is the vibe I get from the Spanish Ernia and I couldn’t be happier to share this album with you. Unlike what the title would lead you to believe, How To Deal With Life And Fail is a success.

This is the sophomore album by Ernia. They’ve been around for more than a decade now, but their self-titled debut didn’t see the light of day until 2018. It already showed great promise with its sludgy, frenetic, ugly sound that took lessons from acts like Pig Destroyer and Wormrot. But something happened in the years after. A vicious hunger for more, perhaps? Whatever it was, it resulted in a high influx of influences. Getting everything to fit together takes a lot of precision yet also spontaneity to make an album flow.

The album kicks right away with one of my favorite things about Ernia: the vocals. Omar Sánchez is fucking relentless. It’s hard to imagine his throat not bleeding from the inside as he unleashes such intense howls and screams. There is a painful tone to them that borrows from styles like screamo and even DSBM. Now, before everyone gets upset about me mentioning screamo, let me tell you that we are talking about particularly nasty stuff like Orchid (USA-MA) and Love Lost But Not Forgotten. Stuff that would leave most grindcore bands to shame. While all this vocal insanity is going on, we are greeted by a schizophrenic songwriting that goes from spastic grindcore like Discordance Axis, unreal mathcore passages, and a powerful sense of groove akin to Benighted in their golden days.

The end result is highly technical yet catchy and charismatic. How To Deal With Life And Fail is a lot to take in over half an hour. The constant tempo changes, unique transitions and mood swings will most likely give you a whiplash on first listen. I know my brain went ballistic with the sludge-turned-mathcore-and-back “Q”, the doomy “Frustration Theory”, the Tool-esque aesthetic on “Dharma”, and the noise-rock sensibility of “New Aesop’s Fables”. Of course, the finisher “Ikigai” takes the cake as far as surprises go. It serves as the perfect example of contrast between genres, with such a depressing beginning that erupts into a brutal ending. Ernia alternate between punkier styles and more metallic styles with impeccable precision, yet their songs shine with spontaneous energy. It’s a fascinating combination of assets and I can’t wait to hear what they come up with next.