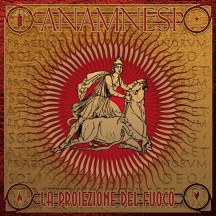 
Now and then, an older album drops into my lap that makes me go, “jeez, what if I had kept missing out on this one?”. Well, the Sardinian one-man outfit Anamnesi certainly fits the bill, and as soon as I heard the opening seconds of this melodic black metal opus I knew I had to spread the word.

Anamnesi is Latinised Greek for “rememberance” which goes well in hand with the historical and mystical themes dealt with here. The man behind the project is Emanuele Prandoni, who has had a career as vocalist in the black metal/psybient project Progenie Terrestre Pura, and as drummer in various Italian bands not (yet) listed in the Metal Storm database. This previous experience as both vocalist and drummer makes a lot of sense when listening to Anamnesi and considering all the instruments except for clean vocals and keyboards are being played by the man himself; the vocals are excellent, having an icy rasp to them and being screamed in short bursts which adds to their percussive quality, and the drums are simply sublime, being highly energetic and varying greatly between otherwise repeated sections, adding to the novelty and replayability of each track.

After three more ambiently focused albums, Anamnesi goes all-in on melodic black metal on his fourth full-length, La Proiezione Del Fuoco (The Projection Of Fire). So, what sort of music is on display here, anyway? Anamnesi himself calls his style “solar metal”, and while that naturally tells nobody anything of use unless they hear his music, it makes a lot of sense in hindsight. The seven tracks on La Proiezione Del Fuoco all have a modern, melodic, and most of all uplifting quality to them. This is not the melancholic, cold sort of music associated with much of black metal, but a grandiose, ritualistic, pseudo-progressive kind that brings to mind works such as Rotting Christ’s Theogonia and Bølzer’s Aura. “Hang on, Netzach,” I hear you saying, “are you really comparing this album to those two masterpieces?”. Yes, I sure am, both in qualifiable and quantifiable terms.

La Proiezione Del Fuoco wastes no time getting to the good parts, with “Origine Prima” (Before Origin) going for blast beats and one hell of a catchy, melodic riff right from the start. The riffs overall on this album, again, remind me a lot of some of Rotting Christ’s better material, having a simple core of just a few chords which are repeated in hypnotic, start-stop fashion, which by precise repetition result in a ritualistic, pseudo-psychedelic swagger exuded throughout the entire album. A male choir subtly elevates the metal into semi-symphonic territories, but never threatens to overtake the blistering meloblack at the core of this album. Towards the end of “Origine Prima”, the metal stops for a while to make room for a lone acoustic guitar deftly plucking rapid Mediterranean folk tones in the same fashion as the oh-so-memorable solo on Tiamat’s “Do You Dream Of Me?” from the seminal Wildhoney. “Fautor Imperii” (Protector Of The Empire) drops to a mid-pace tempo with a rocking Dissection-ish core, but all seven tracks on La Proiezione Del Fuoco are built using the same elements. However, they manage to remain varied enough in pace and tone to never risk running idle.

Of particular note is the fourth track, “La Precessione Degli Equinozi” (The Precession Of The Equinoxes) which is simply one of the most memorable songs I’ve heard in a long while. Seriously, if you already have even the slightest sense that you would like the music I have described here, you need only the slightest modicum of sense to listen to this song right now. The marching main riff instantly worms its way into your head as the song goes through a variety of impressive riff variations and drum work, then ebbs out into a sparse section of acoustic guitar and harsh vocals, setting up perfectly for the first riff to return in grand fashion and close out the song. It is a rare case of a perfect metal song, with everything from performance to songwriting deserving a perfect score.

Also of note are the two final tracks, with “Apathanatismos” (a term referring to achieving a temporary state of immortality) being a well-needed breather with its recital of an ancient ode to the solar deity Mithras among a lush ambience before erupting into slow-paced meloblack in its final minutes, and the closer “I Sette Ragge Del Myste” (The Seven Rays Of Mystery) employing a mid-paced hallucinogenic melody that time and time again explodes into a glorious start-stop rhythm, ending with the chanted words “Deo Soli Invicto Mithrae” (Unconquered Sun God Mithras) signifying it is time to replay La Proiezione Del Fuoco all over again.

Well, what are you waiting for? Listen to Anamnesi’s unconquerable masterpiece already, and become the next new initiate of the cult of Mithras (we have cake).