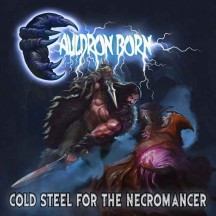 
01. Where There Is No Sanctuary
02. Full Moon Revenant
03. Cold Steel For The Necromancer
04. Thannhausefeer’s Guest
05. For An Unnamed Succubus
06. Steel Juggernaut
07. Mask Of The God Hunter
08. A Grim Homecoming / Phantom-Clad Rider Of The Cosmic Ice


From the depths of the American underground come Cauldron Born, a band that first appeared in the worst time possible for the U.S. power metal style; the nineties. After two excellent studio albums, they split up but resurfaced recently, and Cold Steel For The Necromancer is their first full-length in 20 years.

No, I am not counting the re-recording and re-arranging of …And Rome Shall Fall that came in the form of Legacy Of Atlantean Kings and introduced new vocalist Matthew Knight (Eternal Winter) and new second guitarist, Alex Parra (Paladin, Sadistic Ritual). In case you have never heard of the name before, Cauldron Born is predominantly the brainchild of Howie Bentley, whom you may know from Briton Rites. He is an extremely skilled guitarist that also writes fantasy tales, and both of these talents find appropriate outlet in Cauldron Born.

Seemingly out of nowhere, Cold Steel For The Necromancer came alive following a successful crowdfunding campaign, and it is a superb epic power metal album, with well-crafted lyrics, an atmosphere of fantasy, and tons of inspiration. It captures you in its own world and takes you to another time and dimension, where heroes rule with their will, their bravery, and their sword. There is no room for unnecessary spoken word, pointless intros/interludes, or filler songs. Because no song here falls behind; instead they all have a role to play and a gallant story to tell.

From a technical/performance standpoint, Cold Steel For The Necromancer is also immensely captivating. It is not progressive as such, but it shows proggy tendencies (check out “Thannhausefeer’s Guest”), with more than half of the songs going over the six-minute mark. The album relies heavily on the guitar skills of Howie Bentley with powerful riffs, tempo changes, and intricate solos. And, while Bentley possesses impressive abilities, the songs are not overloaded with drawn-out guitar solos and lead themes; instead, everything seems to last as long as it needs to and every guitar part simply rips. Yes, I know that he’s soloing for over two minutes on “Mask Of The God Hunter”, but would you really want him to have stopped earlier? The other important element is the remarkable vocal performance of Matthew Knight, who reminds me of John Cyriis or Geoff Tate or David DeFeis, depending on which song I am listening to. I shouldn’t fail to mention that the well-known Mike LePond (Symphony X, Death Dealer, Eternity's End, and many others) provides session bass.

However, all these aspects -although great- are of secondary significance. Cauldron Born’s sword and sorcery metal is played and heard first and foremost with the heart. Fans of Virgin Steele and early Fates Warning, who take pleasure in the darkness of Mercyful Fate and like to raise their fists when they listen to metal, Cold Steel For The Necromancer is for you.

“He has no childhood memories
Just a sword for hire
He knows not of your civilized ways
Only blood, steel, and fire”