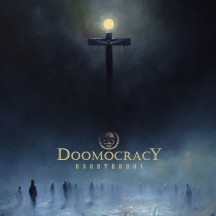 
Stuck in one gear... Unorthodox is ok, but lacks depth, variety and imagination.

So in my last piece, I reviewed a doom album by the band Orthodox, which was in fact quite orthodox. Now it’s time to review Unorthodox, another doom record, and one that’s also orthodox in nature, even though its title claims the opposite. This is all starting to become confusing...

Anyway, Doomocracy’s latest is one of those records that has all the pieces to form one cohesive puzzle. And it actually does form a cohesive puzzle; however, it’s like a puzzle that only consists of 4 pieces, which is to say that it lacks depth and complexity in its song structures. The main issue is that Unorthodox as a whole feels very monotonous. It misses some bursts of energy; just because this is doom metal, it doesn’t mean that there can’t be some moments in it that knock you out of your seat.

If I’m honest, it had been quite a while since I had listened to a Doomocracy album, but I do remember liking Visions & Creatures Of Imagination a lot. So, I did something I normally don’t do for reviews, and I took the time to listen to the previous album again, in the hopes of it giving me more context and making it easier to put the finger on the things that I feel are missing in Unorthodox. While I ultimately didn’t think it was as good as I remembered it, it certainly is a more captivating album than Unorthodox. Its production overall feels very similar in style; however, Visions & Creatures Of Imagination has more grit and “attitude” to it. Every song on that album has its own feel and energy, which leads to an overall experience that is a lot more varied and interesting.

Unfortunately, I have to say that, even though the actual performances are very strong (as well as very solid production), Unorthodox falls into the territory of “background noise” too easily. “Novum Dogma” was probably the only track that managed to grab my attention, with its opening that has a bit of an Egyptian flair to it. Furthermore, it’s a song that has the right amount of depth to it; whenever the instrumentals slow down a bit (I mean it's doom metal after all…), it feels incredibly effective. A good analogy would be to compare it to changing gears in a racing car; shifting right when a gear reaches its limit is incredibly satisfying because it feels smooth and effortless.

That’s what “Novum Dogma” does for me: effectively change gears throughout the whole song. Compared to it, many of the other tracks felt like the band is stuck in 3rd gear, and it often felt like they were bouncing off the limiter. Sure, you can be using a long gears setup, but at some point you’re going to have to shift.

Ok, that’s enough car talk, I think. In conclusion, what do I think of this record? Honestly? Not much. It’s fine: not bad, but not very exciting either. These are some of the most difficult albums to rate, in my opinion, but at the same time some of the easiest to recommend or not. I’d say you can safely skip this one without missing too much. Unlike something like Twelve Foot Ninja’s Vengeance (which I happily admit didn’t fully work for me, but was quite interesting), this is nothing really special. There’s some enjoyment in it, but as a whole it overall fails to deliver.