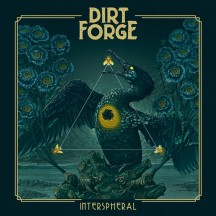 
Coal and gas forges are the way of the past; renewables are the future, so grab some biomass and heat up your Dirt Forge.

Hailing from Denmark, Dirt Forge are a power trio playing metal that loosely falls into the sludge and doom categories. However, unlike their fellow Danes in LLNN (whose drummer Rasmus Sejersen has filmed music videos for Dirt Forge) or Konvent (whose first drummer was taught by Dirt Forge’s Nicolai Lomholt, and whose 2017 demo featured a cameo from Dirt Forge’s Alexander Kolby… sounds like a very overlapping scene in Denmark), Dirt Forge veer more towards the intersection that sludge and doom have with stoner. It’s a well-trodden overlap in the Venn diagram of the three subgenres, and it’s one that bears fruits for Dirt Forge on their sophomore release Interspheral.

“The Observer” reveals the undefined stylistic location of the band early on; on the one hand, you have booming vocals, bluesy grooves and an air of menace, but at the same time, the warmth of the guitar fuzz is primed to appeal to stoner metal fans, as are the cleaner, psychedelic guitar breaks. It’s a song, and really an album as a whole, that should offer joy to those that like Sunnata (particularly the Zorya album) and Domkraft. It’s a song that shifts back and forth between two particular motifs; “Highest Low” instead feels like a more unidirectional journey, but it’s a very strong journey, offering post-metal tension but using a form of sludge that is warmer yet fierier than most post-metal bands.

From this point on, there are 3 ‘full’ songs and 2 interlude-style pieces on Interspheral; of these, “Ascension” is a gnarly brawler, while “Left In The Lurch” leans closer to desert rock, particularly with its dreamy solo and slick grooves. In its more contemplative moments, Interspheral features passages that would satisfy fans of bands such as Spaceslug and Stoned Jesus, but a levelling up in intensity is always lurking somewhere around the corner. “Miscommunision” picks up where “Left In The Lurch” left off by favouring quieter introspection; the subtle guitar noodles, synths and robo-vocals indicate a move in an even more psych-oriented direction, as Dirt Forge ultimately swim in stoner doom waters on this lengthy track, giving an entry point to Sleep fans. It’s funny; most of the band comparisons I feature in this review are to stoner metal bands, yet despite this I feel that as an overall package, Interspheral is a sludge record first, and a stoner one a close second. Ultimately, what it does well is take some of the best aspects of groovier sludge and dirtier stoner metal and show how well they complement one another.

Overall, if you’re looking for music in this region of metal that gives you fire, dirty blues, gnarly groove, and some more melodic soft moments in which to reflect as well, you will do well to find better options released in 2022 than Interspheral. This record is just very well made, and very good fun, and there’s not much more that one can ask for beyond that.

Written on 30.11.2022 by
musclassia
Hey chief let's talk why not
More reviews by musclassia ››