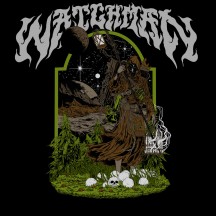 Don't let the title confuse you. Despite its similarities to a certain modern prog death classic, American one-man act Watchman delivers a whole 'nother flavor of our beloved metal with his sophomore release: smoke-veiled, ponderous doom!

Let's get straight to the obvious core element of stoner doom: the guitar riffs. First of all, they're awesome. Of course they are - I mean, what would be the point of stoner doom without its signature droning, mesmerising guitar-playing? However, as George Orwell taught us, "all riffs are equal, but some riffs are more equal than others" - at least, I think that was the moral of Animal Farm.

Anyway, some of the riffs here - such as on "Divided Kingdom" - cover you like a warm, fuzzy blanket, lulling you into a world where your mind goes adrift. The vocals emanate through a muffling filter - like a distant astronaut reaching us through gaseous nebulae via a distorted radio transmission. Floating in space - yeah, that's one way stoner doom can make you feel. But this album offers more than just psychedelics. As its title suggests, The End Of All Flesh is filled with menacing music of a dreadful apocalypse. The song "Death Is Coming" delivers ominous spoken phrases about the inevitability of man's demise, accompanied by an eerie, high-pitched melody and concluding with maniacal laughter (which sounds suspiciously similar to Mark Hamill's portrayal of the Joker).

Yet, as is common among stoner doom releases, some recurring guitar and vocal patterns run the risk of becoming tiresome and eventually boring. While songs like "Fire and Brimstone" and "Righteous Indignation" last a bit too long for my liking with their repetitive melodies, these less enthralling sections are outshined by highlights like the evil head-bobbing groove on "The Smoke". Throughout the album, thunderous rhythms continue to lead you through a shadowy haze of entertaining doom, racking up to a concise package with a less than 40-minute-long runtime.

The End Of All Flesh is sandwiched between its two best songs: the opening "Pour Out The Vials" and the concluding title track. I'm a big fan of albums setting the overarching mood right from the start. Watchman's release does just that, kicking off with an alluring mixture of droning soundwaves, groovy riffage, and ghostly echoes describing how "fire spreads across the land" and bidding to "bring about the end!" The title track ensures that the album closes with the same theme of the end-times. Look upon that robed figure treading across a field of skulls, soak in that pummeling doom metal, and witness the sombre cries of a "blackened sun" and "worldwide bloodshed".

Welcome to the end of the line, where all flesh comes to die!

"Death is coming
For some of you, it's closer than you think

You do not know when it's coming
But I want to warn you again:
Death is coming"