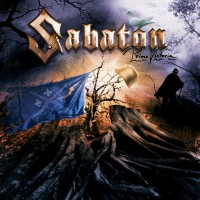 
"Oh no, not another Power Metal band to make my life miserable" if that sentence pops up in your mind, you should make if go away. Sabaton is far more talented than any of those Power Metal bands you're thinking about, Sabaton might be the next glooming star on the Metal sky; at least that's what I think after hearing their latest effort "Primo Victoria"

Formed in the city of Falun, Sabaton signed with Italian label Underground Symphony and released the debut "Fist for Fight" in 2002 (It was originally self-financed and released in 2001) and another album was recorded, "Metalizer" an album Underground Symphony owns the rights for but still haven't released.
So the band left the label and signed with Black Lodge and started to record their third album, "Primo Victoria" and have now released it, their third that's for the moment their second release.

It's raw Power Metal we have on the menu today, Sabaton's sound reminds me much of the first Helloween album (Without sounding like Helloween, just the production) and Stormwarrior. But the music is more like up-tempo hymns in the class of Manowar, but without the vocals and with more guitars, catchy music.
Its fast, melodic, raw, choir-based choruses we're talking about, and lyrics about the Second World War, as you might suspect, after seeing the cover and the name of the album.

If nothing of that might be a really good reason for you to really check out Sabaton, then they have yet another triumph card to throw on the table, the singer Joakim Brodén.
He got this voice you either love or hate, and it reminds quite a lot about Chris Boltendahl (Grave Digger), without being a totally copy.
I'm with the first group, I love his voice it fit's more than perfect that the music Sabaton is playing, unpolished and raw Metal.

All of this together creates this fine piece of Metal, but with everything good, there's always something bad, and "Primo Victoria" is no exception. The biggest problem with this album is that all songs except the title-track are rather boring from time to time. They aren't that bad really, but it's nothing special either, and after such opener as "Primo Victoria" you could expect more of the following songs.

But in general I've to say that I like "Primo Victoria", it's a very pleasant album, that's really could gain some attention, and attention they deserve. And after listening to this I don't doubt that Sabaton will create something masterful in the future, it's just a question about time.

"Through the gates of hell, as we make our way to heaven"