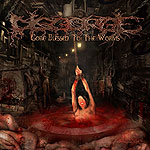 
Disgorge used to be one of the few bands that literally gave me the creeps; I remember feeling drowned in the most disgusting and sickest experience back in those "Chronic Corpora/Forensick" days, then "Necroholocaust" came and gore gore days were over, but good good days came instead.

"Gore Blessed To The Worms" is the word vicious in disguise; this album shows an incredibly solid band with astonishing music and battering brutality that will liquefy your entire body while you're still eager to receive more of this horrendous limb crusher. This album is everything a Brutal Death Metal fan could ask for actually, hostile music with grotesque structures and blasting drumming with super-catchy beats.

Yes, Disgorge is no longer Goregrind...fortunately for some, unfortunately for others...I say, fuck purists! This newer side of the band sounds astonishing and even more brutal than the old Disgorge, I mean let's face it, it was difficult enough to catch a guitar riff or a bass-line due to the sucky production that involved nothing but really loud drums and even louder vocals. Does the new vocalist sounds like Antimo? Of course not, not even Antimo sounds like Antimo anymore (have you heard his sucky side-band Hacavitz?) this new growler never shocked me as Antimo did in the old days though, but he surely does an outstanding work, his vocals are no less than strenuous/hate-powered coughs from hell, seriously!

Finally we have a more complex Disgorge; maybe they became so popular and praised for sounding like splashing mud, but that's exactly the beauty of "Gore Blessed To The Worms" it has clear production, technical execution, skilled songwriting and it still manages to sound like splashing mud! Clean mud, but mud none the less, what I mean is you won't be missing any bit of brutality, they still have what it takes and for the way things look, they won't ever lose it.

Too bad they only stretched this record up to 30 minutes, we seriously need more of this! I can easily recommend this album to every extreme metaller out there, believe me, this is totally a must.