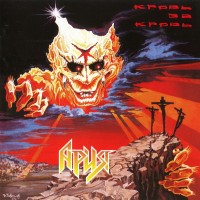 
From behind the Iron Curtain has risen a band that plays heavy metal like Iron Maiden once did, called Aria (Ария). The result is amazing, you feel strongly reminded of that certain sound of the New Wave Of British Heavy Metal heroes, but at the same time you know you're listening to a different band from different country and adifferent background. The striking difference is that Aria sing in their native russian language, but that only proves there is some metal out there to be played far from the global masses, but it's quite as good as the stuff you get in your record stores. You don't even need to understand a word of it, so do I.

This 1991 release contains eight songs in a total playing time of 40 Minutes and 3 seconds of good vocal and instrumental performances of the five russians. Valerij Kipelov's vocal performance show it's best sides right at the beginning on the tracks 'Farewell Norfolk!' and 'Zombie'. 'Antichrist' and the title track 'Blood For Blood' (Krov za krov) remind you most of Iron Maiden's style. In general the influence of the bass player Vitalij Dubinin sounds pretty much like Steve Harris, but the guitars of Vladimir Holstinin and Sergej Mavrin sound most like Iron Maiden on the above named tracks. Well, what else can be said about the russian Iron Maiden? Though the similarities to the english band are obvious, the originality and uniqueness of Aria can't be denied. They are not just a copy of the more famous british metal flagship (though for example the music oo the refrain of 'Krov za Krov' sounds pretty much like a passage from 'The Prophecy' (Seventh Son album), but you can't really say that it's the same), they are a band of their own, having enough guts to show the world pwerful heavy metal in other than english language! The sound can be compared, but also has it's own elements. They went through more difficulties for a longer time (several administrative problems in russia) than their english equivalent and still made their way.

If you like Iron Maiden you have to give Aria a try. Spasibo Aria for more Maiden than most people thought does exist! In fact you have an equivalent for the eighties and early nineties of Iron Maiden, but own songs, russian language, hard to say something more, just take this 7.25 points from me, for a good album!
Written by Pierre Tombale | 19.02.2004