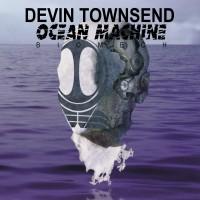 
"O earth, what changes hast thou seen.. there where the long street roars, hath been the stillness of the central sea. The hills are shadows, and they flow from form to form, and nothing stands; Like clouds they shape themselves and go."

Lord Alfred Tennyson's poem opens up the aqueous-themed album by Devin Townsend, appropriately titled Ocean Machine: Biomech. The 1997 album consists of thirteen buoyant tracks and avoids many of the pitfalls that plague so many albums in the genre of progressive metal. Rather than saturating the album with overzealous instrumental passages and bombastic vocals, Devin quite humbly allows the different sonic layers to complement one another, yielding an album that drifts along a strong current of transparent inventiveness. The concept elaborates on the malaise of life from an introspective viewpoint and the struggle to find harmony within the macrocosm. There is a sense of displacement conveyed, the uneasiness of being away from home and the pertinent loneliness. The lyrics aren't the most profound or intricately poetic, but they fit within the expressiveness of the music.

Mr. Townsend explains about his concepts and topics, "Honestly, I don't really know. As a knee-jerk reaction to what I feel, the lyrics are whatever I feel works -- put together in the best way to make things "strange", and that's what it ended up being. The question for me was always centered around what would create a weird energy both for the music and for the lyrics."

The vocals are conducted in a tasteful manner, and everything you could expect from one of the most versatile voices in the industry. Anyone who has listened to Ayreon's The Human Equation will understand the distinct way that Devin's chaotic, multi-layered vocal tracks make you feel like you have just entered the eye of the storm. The sheer aggression in his heavy voice is often paired with the melancholy of his melodic harmonizing, giving fans of both ends of the heavy metal spectrum (like myself) the best of both worlds.
Many fans of Strapping Young Lad will be surprised to hear "Life" two songs into the album, starting off with a distorted, underwater guitar that rises up into a cheerful melody, then sinks back down into the depths only to reemerge for a sing-song chorus that is almost on the verge of poppiness. The great instrumentation of this track keep it from becoming too soggy, along with the way it develops and unfolds into pain felt climax. In the tradition of mad science, "Hide Nowhere" manages to incorporate some wacky background voices throughout, which complement the intensity of the relentless driving guitar rhythm. "Voices In The Fan" mixes heaviness and atmosphere perfectly, ending with a beautiful choir piece, in continuation of the album's fluid balance of machine and nature. The transition from "Greetings" into "Regulator" is one of the most intense moments of the album, if not Devin's entire career. Through this album we catch a glimpse of what is to come in the future productive, off-beat career of our beloved musical maniac.

Back to the subject of Strapping Young Lad, which is how I personally came to learn about Devin Townsend, it is important to understand that in his solo works the "Heavy As A Really Heavy Thing" attitude is no longer present. These outings are more of a focused attempt at musical expression, with more atmosphere, variation, and emotion.

In summation, this album is filled with surprises, everything that "Progressive" is supposed to represent is epitomized within Biomech's 1.2 hours. Unlike anything heard before, the culmination of Devin's musical genius is combined with many influences from all corners of music. Although labeled "Industrial Progressive Metal", many songs are reminiscent of lighter, alternative rock, similar to bands like Filter, while others channel the mystic sonic experimentation of Pink Floyd. Each song often passes through many different genres so it is difficult to pin down any one label, ultimately confirming Devin Townsend's ability to trumpet originality while remaining listen able and coherent.

I highly recommend that you submerge yourself in these turbulent, yet calming waters... just remember to breathe!