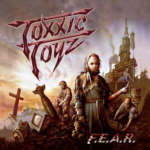 
The very first thing you notice about this band, is that the band name is already quite "interesting". I won't comment on that though, what Toxxic Toyz give us musically interests me far more. When the first minute of the album is over you already know what these guys have in store for you for the next hour.

Here we get a really high-class mix of modern Heavy Metal and Hard Rock, with versatile song-writing and frequently changing song structures, rhythmic to-the-point drumming and a very good, although not very variable vocal performance. What we get most of all though is a delightful package of riffs. Leads, lots of short solos and fast-paced, constantly changing riffing, I don't think a fan of electric guitars can wish for much more.

In the songwriting departments the band isn't always that consistent though, some songs having very memorable and catchy chorus lines (the track 'So Sorry' comes to mind as an example) while some others are forgotten the moment the next song starts. Generally I think many songs could have been shortened a little bit or some tracks even scraped entirely, but don't worry, while listening to the album these thoughts never stay long because the next awesome riff or catchy chorus is always right around the corner, just a few seconds away!

So all in all F.E.A.R. is a very strong release which combines elements of modern but also old school Heavy Metal, as well as more Hard Rock oriented parts. There are also parts that seem to borrow from the Power Metal section of the metal spectrum. Although there are some forgettable moments the CD as a whole is very solid and can easily be listened to from the beginning till the end.

I can highly recommend this CD to fans of Heavy Metal, Hard Rock and also to most Power Metal fans (those who can live without the high vocals and keyboard solos, you won't find anything of that sort from Toxxic Toyz).