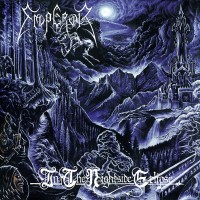 The Alckerhaugen Tapes 1993
10. The Majesty Of The Night Sky [4-track pre-production]
11. The Burning Shadows Of Silence [pre-production rehearsal]
12. I Am The Black Wizards [rehearsal]


Behold the greatest symphonic black metal release ever! "In The Nightside Eclipse" is one of the most important albums in the 90's Norwegian black metal scene. Consisting of 8 tracks plus two covers (Bathory - "A Fine Day To Die" and King Diamond's "Gypsy") this album has managed to show the listeners that black metal can be raw and extremely melodic at the same time.
Due to the changes which Emperor introduced into their music throughout their existence (mixing in progressive elements), black metal elitists in their periods truly enjoy taking a shit on Emperor every once in a while. But even those guys can't argue with me when I say that this album is a masterpiece.

Ihsahn was the main composer on this album, and as a guitarist, he focused on creating powerful riffs, often comprising of diminished structures which resulted in a sound that sends chills down your spine. He also composed the keyboards and managed to use them to create a unique atmosphere surrounding all these raw riffs. But the keyboards are definitely not overused. In songs such as "Towards The Pantheon" you can hear a subtle clean guitar line which is inferior to the keyboard melody going on at the same time, but such situations are rare in this album.

The vocals are also done by Ihsahn. They sound very powerful, and can really amaze the listener at times, but the lyrics are very hard to understand. Clean vocals are also rare in the album. If you read the lyrics they might strike you as being pompous and perhaps over the top, but they surely do add to the quality of this release.

Faust has done a good job with the drumming as well. It's nothing too special, mostly generic beats with a few variations every now and then, some really energetic blasting, but it is all well put and clear. The production is a bit fuzzy, but by the time the magic of this album sucks you in, you won't even notice it. You'll be on your way to fantasy land.

This album basically has it all, it's even got a really killer cover. It's a landmark of True Norwegian Black Metal and it sure is a shame to miss out on something like this.