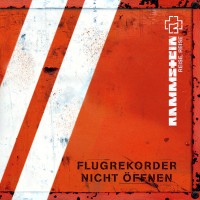 
With nervousness and anxiety, I went out from the disc store to my house as fast as possible, almost running across a sea of people by the pedestrian streets in downtown, and then waiting with desperation for a bus to take me home quickly to check my expected new acquisition. While finally in my room, I remove with trembling hands the plastic covering the CD, open it with strength and the disc finally finds its way to my player.

This introduction is based on a real story, and it was made just to show you how important was for me to have in my hands "Reise, Reise", the new Rammstein's release. These Germans, absolute masters of European industrial metal, had always amazed me so much not only with each album, but also with every single song, choir, riff and vocal work, that I didn't expected less than a truly masterpiece with their 4th studio production; that is why I was waiting for so long to this moment to come.

It is doubtless that these previous expectations had a lot to do with my deception after listening to the whole album. My confusion began since the opening track, named the same as the disc, which is far from being the explosive, punch-to-the-face song that uses to introduce each Rammstein's album. You're always expecting the great choir, something big to happen, so is really frustrating when that piece ends with the same boring mid-tempo with which began. Unfortunately, that will be a constant that is going to be present in almost every part of the disc. Drums are boring and monotone, keyboard saves some situations but doesn't make the difference and the riffs do their job, but just the necessary, being so predictable. There are not "bad" songs (with the exception of "Los", by far the worst in the band's career), but nothing extraordinary neither; some of them just carry out what we could expect from Rammstein and that is ok, titles like Mein Teil, Dalai Lama, Moskau or Ohne Dich are worth enough to own this album, but there's a strong sensation that the masterpiece we were waiting for is so far from here.

Another fact that could help us to understand the lack of confidence of the band about this album, is looking to Amerika, the first single. All it has to give us is an extremely catchy choir, I would bet that the "We are living in Amerika, Amerika ist wunderbar, we are living in Amerika, Amerika, Amerika" will buzz around your brain for a long, long time. The real plus of this song is based just on its political content, which uses the over-abused idea of anti-Americanism, that is becoming a "political correct" trend all over the world outside the US.

A mention apart deserves Moskau, which is a rather strange experiment. Mixing normal German singing with female vocals in Russian, creates a kind of musical dialogue which is more funny than good. By the way, I am sure it is one of the worst feminine voices I had ever heard, but the track is absolutely worth to hear and is by far the most original song this album contains.

And what about the ballads? It is difficult to imagine a Rammstein's disc without at least one of them, and this is surely not the exception. The last three songs in Reise, Reise are ballads, being the most remarkable Ohne Dich. They are beautiful, atmospheric and really sad and depressive. As I consider myself a die-hard fan of industrial slow songs, I enjoyed them a lot, although non of them reaches the level of Mutter or Seemann.

It is difficult to write a conclusion about this album; is not a bad one at all, but is impossible to make a review of a band without of a context. If this were the first Rammstein's album I listen too, I would surely feel interested for the band, but is undeniable that is the worst (or least good) release of these guys, and always hurts when a beloved band gives you so
much less than you would expect.
Written by Iconoclasta | 31.10.2004