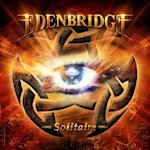 
Are you willing to leave behind your former self in the quest to reach the uncharted lands of human consciousness? Edenbridge's latest, Solitaire, invites us to dive headstrong into our own emotional whirlwind, to unearth higher levels of beauty by conquering our own minds, in order to attain a more dynamic and confident self. And with melodies this addictive and lyrics this inspiring, the often elusive and unseen path to personal empowerment seems more like an illustrious, well-lit highway.

I had thought Edenbridge had peaked with their previous release, MyEarthDream, but that album was instead the beginning of a new era for the band, with Solitaire reaffirming the band's mastery of symphonic metal. The more aggressive guitar rhythms last time around are back again, and creative force Lanvall continues to offer an unending wealth of unique and touching solos. While the live orchestra on the last album does not appear on Solitaire, some stunning use of symphonic software and composing this time around could easily convince the casual listener that the orchestra had never left.

Sabine Edelsbacher's vocals take me on an airborne flight filled with dramatic updrafts and plunges, curving around the mountains and above the tree line like a determined, yet elegant falcon. Lanvall's arrangements are those opportune bursts of sunlight or a dramatic, shadowy cloud that seem to synchronize at just the right moment with Sabine's voice for a picture that charms even the most jaded of souls. Not even a minute into "Further Afield" we find a well-timed instrumental buildup that falls into a layer of a cascading riff, lyrics to match, and a vocal line that flows right down with it, only to catch itself in a crystal clear lake at the bottom of the waterfall, ready for the expansive chorus. "Skyline's End" gives Sabine the floor about three and half minutes through, letting her voice fill the horizon with words of our own humanity's precious time and destiny, sung with such self-assurance that I must say she's outdone herself again.

Looking for excellent solos, courtesy of a sound that only Lanvall knows how to provide? Two of my favorites are found on "Out Of This World," and on "Brothers On Diamir." The former is a pensive, near ballad that delves into an individual's loneliness, and thoughts of the meaning of freedom, an ideal foundation that leads into a song-ending minute and a half long solo that echoes through the ages, personifying a vision that I am looking down at planet Earth from some remote, desperate outpost. "Brothers On Diamir" invokes the sadness of a what initially was a triumph, as two brothers, Reinhold and Günther had climbed Nanga Parbat, only for one to meet his demise on the descent. The music is one of reminiscence, with the solo halfway through providing a tearful clarity and bittersweet bridge to the farewell to a forever lost family member.

Lanvall is smart enough to know that a great guitarist stops short of self-indulgence, and lets intelligent arrangements work their magic and also when to let his vocalist have the spotlight. The promoted video track, "Higher," one devoid of a solo and arranged with inherent simplicity, still leaves me with a renewed sense of myself, as I can drown fully in a soft keyboard melody surrounded by Sabine's moving vocals. Alternatively, in the album's most assertive track, "A Virtual Dream?", Lanvall lets his solo act more as an equal to one of the band's most energetic riffs yet, heavy-hearted choir sections, and a drastic layer of keyboards atop Max Pointner's drumming.

Solitaire offers a fusion of rousing melodies, mature musicianship, and the knowledge that an individual's growth is best attained from within, by overcoming despair, solitude, and loss only to return on a new, more profound plain of existence and comprehension. Edenbridge has yet again rediscovered themselves, taking us to another mountain's peak we never new was there, and now could never consider leaving.

Written on 26.08.2010 by
Jason W.
Music and the written word are two of my passions in life, so I figured, why not combine the two?