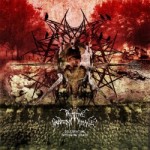 
01. Into The Godless Chambers
02. The March Of The Cattle
03. Kings Of Infinite Space
04. Towards Infinite Planes
05. War 'Til Death
06. March Onward/Celebrating Impending Chaos
07. Wandering Through The Wood
08. A Gruesome Relic Of Death And Decay

The technical aspect of the musicianship and the groove-influenced riffs bring up comparisons to Down-Under demolition experts Deströyer 666, while the straightforward chaos is eerily reminiscent of early Mayhem and of course fellow country mates Anaal Nathrakh. There is obviously an apparent lack of originality when name-dropping comes this easy, but the execution on this album alone makes Primitive Graven Image stand out above most other modern black metal artists. While they don't push any boundaries, they are cutting edge in that they enhance a genre suffering from dozens of unremarkable bands forming each year.

The album is very well produced (thanks in part to Russ Russell - responsible for notable Dimmu Borgir and Napalm Death releases), but not so much so that it loses its "true" credibility. The old school black metal influence is very much alive, which should please the crusaders against [insert melodic metal genre here], though there are some progressive elements to the band's sound that keep the album from sounding banal. Dokkalfur's prudent guitar solos polish off the album rather well, while Vordhr exchanges his blastbeats for some catchy beats and impressive cymbal work intermittently, again focusing on maintaining that "cutting edge" approach. The duo manage to create some incredibly catchy sections that burrow deep into the listener's brain, much like epic death metallers Nile.

Primitive Graven Image managed to condense all of their ideas into a brief 40-minute recording, making Celebrating Impending Chaos an easy pill to swallow - and a memorable one at that.