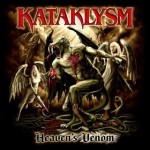 
Commercial death metal is - in the eyes of this reviewer - a dead sound. It is far too safe and lacks the integral extremity that makes for something in the genre's style worth listening to in the first place. Kataklysm, one of the more notable Canadian death metal connoisseurs, have taken their Northern Hyperblast trademark sound and ventured into generic territory. So much so you can judge this accurately just by the cover art: yet another appearance by the infamous gargoyle. It will probably sound a lot like the other gargoyle-graced albums.

And it does. Heaven's Venom, essentially Prevail diluted and stripped of its guts, contains bass-laden primal death metal riffing (chug chug chug ad nauseam) with some really nice melodies interspersed throughout the album. The songs generally flow together evenly, and the drumming keeps a fast pace - though noticeably monotonous - along with Iacono's typical hoarse growls. While each piece more or less works on its own, the album as a whole lacks cohesion. Those nice melodies are better suited for a power metal album, and solos are few and far between - not to mention completely forgettable. The flow is basically a result of each song blending together before eventually fading out and concluding what could have been a much better album. It comes across as a piece of plastic rather than something meant to entice you into repeated listens.

Despite their foray into contemporary waters, Kataklysm's style is outdated and dull. The predictable song structures make for a rather boring listen, especially given the lack of overall innovation. Perhaps it should be expected after releasing "poor man's" versions of the same release for an entire decade, which could be overlooked if some experimentation took place. But it doesn't. If the band members thought to make a desperate grab for a female vocalist or a new instrument or something, this album would at least fall between the lines of "good" and "very good". However, it continues treading the same path of its predecessors, and rarely takes time to stop and smell the roses.

At the end of the day these guys can do just about whatever they want in regards to their sound and their releases. They have a large fan following (most of whom won't be disappointed with this album) and a big label to back them up. This is merely a release to please the fans of the current style, nothing more.