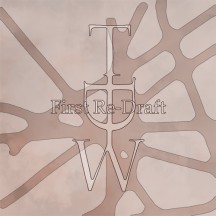 
Tom de Wit is the man behind the project TDW, hailing from The Netherlands. He essentially does it all, including the production, leaving only the solos and most guitar leads to Methilde Bouma and Sander Stegeman.

First Re-Draft is an ambitious and conceptual album with three chapters (Dreams, Endings and At The End Of Love) and it reads as a book, revealing more as you turn the next page. The songs have progressive written all over them, and generally speaking, they lean more toward a classic progressive feel, which doesn't make it retro. Actually, the main trait of this album is the fact that it allows itself to experiment with sounds, samples, and different musical routes with its particular use of keyboards and the predominance of solos.

The album only really kicks off with "The Mourning After". In fact, "Endless" might throw some people off but don't be discouraged by it, there are far better things ahead. This is a very sentimental and emotional album, the lyrics seem very personal and honest. However, what I would like to highlight in First Re-Draft are the electronic elements, the industrial moods and the synth effects used. "Dreamwalk", for starters, is very catchy and groovy, and is followed by "Overture", a stunning orchestral work and one of the best songs on the album. "My Loss", with its overlapping whispering voices, echoes and sinister atmosphere, represents the darker ambiances of the album, especially found in the third chapter. There is a wide range of musical shapes explored by TDW and the calmer states work as well as the heavy guitars exchanges.

Even though it falls into the trap of some clichés in terms of the guitar work, the album has enough interesting points to make you turn a blind eye to that. Some of the vocal lines seem awkward at first, but they are just unconventional, which makes it harder to grasp. In fact, Tom de Wit's voice adapts perfectly to the different environments of the songs. And as opposed to so many albums which give you the same thing over and over again, this album provides diversity and versatility. At the end of the day, that is what is most appealing about First Re-Draft.

First Re-Draft is a remake of the album First Draft, released in 2004.