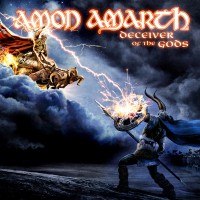 Additional info
The Special Edition Box features:
- The album as digipack.
- A 2 sided poster with the album artwork and a picture of the band.
- The ultra rare 4 song EP "Under the Influence".
The set is enclosed in a hardcover fliptop case.

The Super Deluxe box includes the two CD special edition of the album and a ten inch Loki bust all housed in a fliptop case. The CD case can be hidden in the base of the bust.