Georgia-based heavy rockers Royal Thunder have returned with their first new single since the release of 2017’s Wick album. Check out "The Knife" track together with a Justin Reich-directed official video down under.

Georgia-based Royal Thunder have revealed they're working on material for their first new record since 2017's Wick. Demoing process is currently underway. Official recordings of the new tunes will begin later this year. 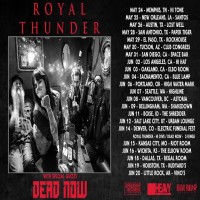 Atlanta, Georgia based heavy/stoner metallers Royal Thunder recently confirmed a headlining North American run, to be executed this May and June. Joining them on the road will be Dead Now. Check out the list of all booked live dates down under (tour flyer).

After releasing the acclaimed debut CVI back in 2012, followed by 2015's Crooked Doors record, Atlanta's Royal Thunder third offering is coming out this year. Titled WICK, the album is due out on April 7th via Spinefarm Records. While the band has already shared material from it, now you get to hear their new single, "Plans". Enjoy the jam below and share your thoughts on the music.

Are you ready for some new Royal Thunder material? You'd better be because the U.S. metallers just premiered online a brand new tune from the impending Wick album. The song is called "April Showers" and appears on the follow-up to Crooked Doors, due out via Spinefarm Records on April 7th. If you want to listen to it, head here. Don't miss the opportunity!

Royal Thunder just announced their new album! The third album of their career will be entitled WICK. The cover and tracklist of their brand new album has been unveiled today and you can now take a look at it. The record is due out on April 7th via Spinefarm Records. As for the music, it is still under wraps.

"Time Machine", a brand new official music video from Royal Thunder, is now available for streaming through the YouTube down under. This 7-minute long track comes of the group's recently released sophomore effort, Crooked Doors, out in stores worldwide since April 7th. The mesmerizing video clip was directed by J.P. Bradburn.

You don't have to wait another minute to listen to Royal Thunder's new album Crooked Doors. This is only the band's second album, but they got plenty of attention with their acclaimed 2012 debut CVI. How does it compare to their debut? Is it a step forward? You can draw your conclusions after you listen to the entire 59-minute record via NPR here.

Royal Thunder have released yet another new song from their forthcoming album Crooked Doors. The Americans have already released "Forget You" and "Time Machine" before online. This time around, they are revealing "Ear On The Fool". Click on the SoundCloud player, available over here, to listen to the song now!

Royal Thunder is sharing new music today. The Atlanta metallers are about to release their new album Crooked Doors next month and to whet your appetite, they have revealed another new song called "Time Machine," the album opener. You can enjoy the 7-minute track over here right this minute. Very melodic, the song gives plenty of room for MLny Parsonz's voice to shine.

After revealing all of the details of their new album, Royal Thunder, the Atlanta based group, share now a new song. They are back with a new opus entitled Crooked Doors and the first tune you get to hear is "Forget You". Listen to it below, on SoundCloud or YouTube, and tell us if you like it.

Who wants to hear new music from Royal Thunder? Okay but just a little teaser for now. But there is more from the Atlanta band today. You can check out the album's cover artwork and more details as well. Don't forget to check out a sample of the track "Forget You" from the imminent album Crooked Doors to whet your appetite.

With their last full length having come out in 2012, Royal Thunder have finally announced the title and release date of their sophomore full-length. The album will be titled Crooked Doors with an official release date of April 7th. The album is to be released via Relapse Records, and is already recorded. Get ready!


Royal Thunder - In The Studio

Royal Thunder are back in the studio to start recording what will be the follow-up to the debut CVI. You might remember that album from Metal Storm Awards 2012 where it was nominated for best Debut Album and also best Sludge / Stoner Metal Album. Expect a fall 2014 release via Relapse Records.

The US stoner/sludge female-fronted quartet Royal Thunder has teamed up with Pitchfork TV to release a new music video for the song "Blue". The song for this video, which can be seen below, is taken from the band's debut album CVI, released in May, 2012 via Relapse Records.