Sinister premiere "Deformation Of The Holy Realm", a third and last new track prior the official release of their forthcoming, same-titled album. This outing drops on May 29th via Massacre Records.

Dutch death metal unit Sinister share more details about their new studio effort, Deformation Of The Holy Realm. Aside from the cover artwork, which can be seen below, the band have set May 22nd as the official release date.

This year will see the release of a new Sinister album. In order to showcase new material, the Dutch death metallers have now revealed the music video of "Neurophobic", taken from upcoming CD, Syncretism. Check out the video created/directed by Sebastiaan Spijker below for the song.

Dutch death metallers Sinister are back with another new album! Following 2014's The Post-Apocalyptic Servant, and the anniversary album Dark Memorials, the band is releasing Syncretism on February 24th, 2017 via Massacre Records. Produced, mixed and mastered by Jörg Uken at Soundlodge, the opus features cover artwork by Alex Tartsus Art Studios. Feast your eyes on it below.

Veteran Dutch death metallers Sinister will celebrate their 25th anniversary with a record called Dark Memorials, expected to be released on June 26th via Massacre Records. And since it's celebration time, you can now enjoy Sinister's cover version of Slayer's song "Necrophiliac" below. The release will feature two old re-recorded songs from the band and covers.

For the first time since forming all the way back in 1988, Dutch death metal veterans Sinister will be touring down under in Australia. The band recently released their 11th full-length album, The Post-Apocalyptic Servant, and are doing a string of tours and dates in support of that release. Check out the list of confirmed Australian dates under the flyer.


Sinister - To Release New Album In May, Streaming New Track

Dutch death metallers Sinister are pleased to announce the release of their upcoming new album, The Post-Apocalyptic Servant, on May 23rd via Massacre Records. The follow up to The Carnage Ending is the band's 11th full length studio release. The new track "The Burden Of Mayhem" is already available for streaming, and can be heard through the YouTube player below. Of course, don't forget to check out the cover artwrok and tracklist of the new album. 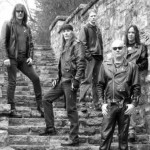 "World Of Evil", a brand new official music video from US heavy/doom metal act Sinister Realm, is now exclusively available for viewing below. "World Of Evil" is the title track off the group's upcoming 3rd full length album, which shall see the light this July 21st via Shadow Kingdom Records. This videoclip was directed by Stacy Feit.


Sinister Realm - In The Studio 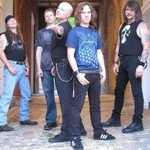 Dutch death metal veterans Sinister are streaming online the new track "Transylvania (City Of The Damned)", which can be heard below. The song appears on the band's forthcoming album The Carnage Ending, which is scheduled for release on September 28th via Massacre Records. More details about the new album can be found here.

Dutch death metallers Sinister have recently revealed the tracklist and cover art for the band's upcoming album titled The Carnage Ending, which is planned to be released in the summer via Massacre Records. Sinister has also recorded five cover songs that should be part of a bonus disc for the upcoming album.

Dutch death metal band Sinister - who recently went to some severe line-up changes - have announced the addition of bassist Mathijs Brussaard to the group's ranks.

Sinister mainman Aad Kloosterwaard briefly comments: "We like to welcome Mathijs Brussaard as the new Sinister bass player. We are now a 5 piece band and hope with this to bring our new songs to a higher level."

The line-up is completed with drummer Toep Duin (ex-Supreme Pain, Godmode), guitarist Bastiaan Brussaard (Supreme Pain) and guitarist Dennis Hartog (Godmode) who all joined the band a few weeks ago.

Soon the new Sinister line-up will start working on a new album which will be entitled The Carnage Ending.

Only a few days after Aad Kloosterwaard announced his band Sinister was once again going through some line-up changes, he already introduced the replacements earlier today. Soon the new Sinister line-up will start working on a new album that will be entitled The Carnage Ending.

Kloosterwaard released the following statement: "I think that a lot of people already know that I am the only one left from Sinister, but for the fans how like my band don't be afraid I have already a complete new line-up together. Behind the drum kit we have now Toep Duin (ex-Supreme Pain, Godmode), on guitar Bastiaan Brussaard (Supreme Pain) and on guitar/bass Dennis Hartog (Godmode).

Soon we will start with the first practise with the new Sinister line-up. We have also already 2 new tracks finished.. "Deranged By Desecration" & "Regarding The Imagery" by the hand of Bastiaan for our next record.. that will get the name The Carnage Ending"