New official video for the track "Burn In Hell" from Today Is The Day has been launched. The song appears on the band's forthcoming No Good To Anyone record, set for February 28th release. Video was directed by David Hall.


Today Is The Day - US Headlining Tour Confirmed

Today Is The Day have unveiled a full list of headlining tour dates across the United States, scheduled in February, March and April. The band will be touring in support of their new, upcoming full-length No Good To Anyone (due on February 28th). This 5-week long trek will also feature support from The Obsessed plus Child Bite and 16 on select dates.


Today Is The Day - Release Title Track Of The Upcoming Album

After more than 5 years, a new full-length from Today Is The Day is ready to be unleashed. Entitled No Good To Anyone, the outing will be out sometime in 2020 (exact date still unknown for now). In addition to the first album details, Americans have also revealed a title-track, which is available for listening below.

2017 will be a big year for Today Is The Day, who have joined the roster of The End Records. The U.S. band has new releases in store for 2017, including the reissuing of the record Temple Of The Morning Star on vinyl, CD and digital for its 20th anniversary. They will also do a one-time only tour performing Temple Of The Morning Star from beginning to end in the USA, Canada, Europe and more. Moreover, the band is currently writing their next album and will record it in the next few months.


Today Is The Day - Announce Tour With Abigail Williams 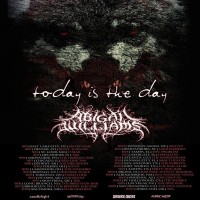 US noisecore act Today Is The Day have announced a month long tour with US black metallers Abigail Williams, taking off September 11th, in Salt Lake City, Utah, and ending on October 16th, in San Francisco, California.


Today Is The Day - Tour Cancelled After Van Accident

Today Is The Day were set to start a three-week tour yesterday in support of their new record Animal Mother. However, the band will not actually go ahead with the tour. Their van was hit by an out of control car with Steve Austin and TITD merch man Trevor inside. Their van and equipment were totally destroyed along with their merch. Luckily, they came out alive of the accident.

Noise bringers Today Is The Day have shared online a new sonic assault called "Masada". This is also the first track you get to hear from their upcoming album Animal Mother. What are you waiting for? Click play on the video created by David Hall / Handshake Inc. below to enjoy it.


Today Is The Day - New Album Details And Trailer

Today is the day, folks. Today Is The Day's new album is closer than you might think. The group just revealed Animal Mother as the title of their upcoming assault. Besides that, you can take a look at the album's cover art, tracklist and also a visual trailer with the first taste of audio goodness. Waste no time and enjoy it!

Today Is The Day have joined Southern Lord Recordings' roster for the release of their anticipated tenth studio album later this year. The final sessions for Today Is The Day's tenth full-length will be taking place in June, and now the band unveils the name of the impending output as Animal Mother. Final details on Animal Mother will be released in the coming weeks as the album is completed.

The successor to the album Pain Is A Warning (2011) is in its recording stages as Today Is The Day recently announced. This will be the tenth album of the American veteran band and it will be heavy. Be prepared!


Today Is The Day - To Embark On North American Tour

US extreme trio Today Is The Day will embark on an extensive North American tour this coming March and April. Today they have unleashed the first wave of confirmed dates, which can be checked out below.


Today Is The Day - Set To Release New Album 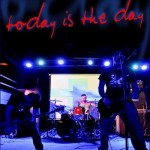 Today Is The Day are set to enter the studio any time soon to start the recordings of their Black Market Activities debut. The band will be recording in March with Converge guitarist Kurt Ballou. A summer release is expected.

Afterwards, Today Is The Day will do a European tour in support of the album. Dates have yet to be announced. The band has also been confirmed for the Roadburn Festival on Thursday April 14th in Tilburg, The Netherlands.


Today Is The Day - New Live Drummer And Tour Dates 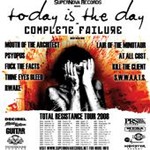 Ex-Hate Eternal drummer Derek Roddy has left Today Is The Day due to an alleged financial dispute with band-founder Steve Austin. Replacing Derek Roddy for the group's current Total Resistance Tour is Mike Rosswog from Circle Of Dead Children.

Their current Total Resistance tour began on March 14. Here are the details from March 26 onwards:

Supporting Today Is The Day for the entire tour are SuperNova Records labelmates Complete Failure, featuring drummer Mike Rosswog (ex-Today Is The Day, Circle Of Dead Children). Also joining them in the US tour is a rotating lineup of bands, including: At All Cost, Fuck The Facts, Lair Of The Minotaur, Mouth Of The Architect, Psyopus, Rwake, S.W.W.A.A.T.S., Thine Eyes Bleed.

Supporting the band for the European Tour are Complete Failure, Jucifer and Four Question Marks.

Supernova Records will also be releasing remastered, repackaged reissues of two classic Today Is The Day titles, as well as Complete Failure's debut album, to coincide with the tour. The following are the US headlining dates only. The European Tour dates are provided further below.

Dates with Mouth Of The Architect, Psyopus and Complete Failure
3/27 Rochester, NY @ The Bug Jar