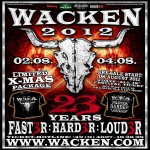 Right this very moment the last few hours of the 2011 edition of the world's biggest open air metal festival is taking place. But the organization isn't sitting still and has already revealed the first couple of names for the 23rd Wacken Open Air, set to take place August 2-4th 2012 at Wacken, Germany.

These first names include Scorpions, Ministry, Hammerfall, U.D.O., Amon Amarth, Gamma Ray and Cradle Of Filth. Get more info and ticket details after the jump.


Scorpions - Best of... last german Open Air Show ever!
They wrote music history and are one of the most successful German rock bands of all time! We speak about the Scorpions! Rudolf Schenker, Klaus Meine & Co will shake the field during the "Night to Remember" for the last time with a "Best of" setlist without any comparison. A really unforgettable live experience and a MUST SEE for all fans who want to see their idols for the last time on a German Open Air stage!

Ministry - Best of... Show
Uncle Al is back! The industrial legend, which created a completely new style of metal with the record Psalm 69, is back again! After their 25th anniversary farewell shows back in 2008 the band of mastermind Al Jourgensen returns to destroy Wacken once again!

Hammerfall - Anniversary Show
The Swedish power metal legend returns to Wacken! Joacim Cans and his band played W:O:A for the first time 15 years ago and will celebrate this stage-anniversary in 2012 with us!

U.D.O.
U.D.O will also rock Wackens stage in 2012 and will celebrate their unique anniversary and birthday show!

Amon Amarth
The Vikings return to Wacken! After climbing to the top of the Viking metal scene during the last few years, Amon Amarth will be back once again; FASTER:HARDER:LOUDER!

Gamma Ray
The german speed-/power metal heroes give themselves the honor to play the Wacken Open Air 2012! Kai Hansen and his colleagues will be burning down the house!

Cradle Of Filth
After they unexpectedly had to cancel this year it was a matter of honour for them to confirm for W:O:A 2012


The ticket pre-sale starts on Monday 8th of August at midnight. These X-Mas packages will include a 3-days-"ALL IN"-Ticket for the price of €120 (including VAT + 10,-€ pre-sale fee and including a W:O:A Cult- T-Shirt).


[Thanks to MS reporter Promonex who is at Wacken right now for informing us!]