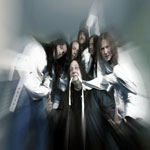 Christopher Kinder announced the following: "Good day one and all, We thank you all for your patience with regards to announcing our new recording plans. While JOP is very much intact and focused on new music and future touring... Jon Oliva' will release his first ever solo record in early 2013."

"Jon has assembled a collection of ideas from the past 4-5 years and wants the opportunity to present them as his own work. Jon will be recording nearly all the instrument tracks and vocals himself and also playing drums on several tracks. Once again, I have the honor of recording the bulk of the drum tracks on the new CD, but this record will have been created from start to finish with Jon being completely at the helm."

Jon Oliva commented on the album: "I've got some weird ideas that I wanna try and I've got some time to do it. I don't want do just 'another' JOP record. I've done four of those already. I wanna do something different. I have some material that I've wanted to put out for a while, that I'll talk with the record company about, maybe putting something out quickly, like in the next four or five months, to give me more time to do this JOP record. I want the next JOP CD to be very special. I've got some great friends from other bands that are going to be a significant part of the next JOP release. We are going to do a killer JOP record and then an additional bonus CD with guest stars... kind of like the Avantasia thing but not in a story line. Tobias Sammet does a magnificent job with it, but I don't have that much time to write a whole story, so I'll just have some powerhouse friends from various bands come in and take it over the top."