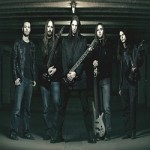 Major news for Alkaloid fans. The H. P. Lovecraft inspired progressive band has presented the new track "Azagthoth" and revealed the details of their new album, Liquid Anatomy, to be released on May, 18th 2018 on Season of Mist. Hear what drummer Hannes Grossmann (ex-Obscura), bassist Linus Klausenitzer (Noneuclid, Obscura), guitarists Christian Münzner (ex-Spawn Of Possession, ex-Obscura) and Danny Tunker (ex-Aborted), and guitarist and vocalist Morean (Dark Fortress, Noneuclid) have come up with this time around.


Drummer Hannes Grossmann comments: "It's been three years since our debut full-length came out and we're thrilled to finally give the world a glimpse of our newest effort, Liquid Anatomy. The track 'Azagthoth' picks up on the Lovecraft theme (as revealed by the title) that was already featured on our previous album, which made it a perfect fit for the first single. All 8 songs on the new album are drastically differing from each other as their stylistic and dynamic range is much wider than before. At the same time, we managed to create a cohesive record, on which every song can stand alone and simultaneously adds to the full picture. Even though 'Azagthoth' comes across as quite catchy, it's a very complex track with polyrhythmic time signatures. For example, I am playing the drums of the song's chorus with my hands with a simple 4/4, while my feet and the guitars are mimicking a 5/8 that is running through the entire track. Well, this kind of musical complexity will not come as a surprise to listeners of our previous record. However, our songwriting does not focus on complexity or technicality. These things matter less than writing a great timeless and unique song that is not confined by any musical boundaries. This being said, I hope that you will like this song as much as we do. Have fun!"