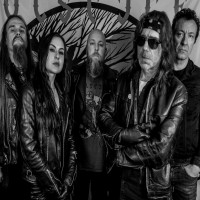 After splitting up with Paul Kearns earlier this year, UK's epic doom metallers Solstice now proudly introduce the new vocalist - Hel Thorne - as the full time member. Full statement from the band can be read below.

Statement from the band: "After months of inactivity we are happy to introduce you to our new full time vocalist, H.Thorne. Some of you may recognise her as the former vocalist and songwriter from the US epic metal band Chalice, one of the best bands of the past decade to emerge from the country.

"Let us say this; as the band has grown it's important to recognise that Solstice represents not just an exclusive "men only" bastion, but an ongoing and ever evolving idea. And that idea does not exclude women. It would be churlish also to not acknowledge Tom (While Heaven Wept), Scott (Cianide) and Felipe (Procession) who provided valuable insights and advice during all this.

"As a consequence, we have with the aid of the sage like wisdom and technical skill of Mr. Richard Whittaker, made her audition recordings available via our bandcamp page as the White Thane release. These are free to download or leave or donation. You are under no compulsion to do anything else. In closing, the choice was ours to make, it was neither made with cynicism or avarice in mind. It was made because she worked hard and shared our vision."