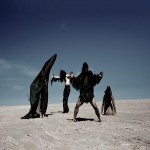 New Mexico-based metallers Old Man Gloom have revealed plans and first details for the release of their upcoming studio record. The new effort is dubbed Light Of Meaning (Seminar VIII) and is set to be unleashed in May through Profound Lore Records. More to follow.