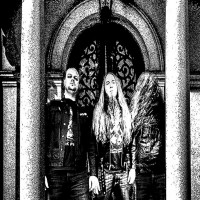 September 17th has been set as the official release date of the Occulsed debut full length, dubbed Crepitation Of Phlegethon. The latter was mixed by the band's guitarist/bassist J. Stubbs, and mastered by Leonardo Bellavista at Void Recording Studio. One of the tracks, "Unction Of Muliebrous Broth", serves as the first taste of what to expect and can be streamed via Bandcamp down under.