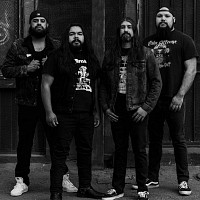 Los Angeles thrashers Fueled By Fire are premiering a visualizer video for their first new song since 2013, "Bloodshed." The song is the B-side from their upcoming release, Past​.​.​.​Present​.​.​.​No Future Pt. 1, the first in a pair of two-song 7-inch releases produced by Allan Falcon, mixed by Carlos Cruz and mastered by Joel Grind.


"Bloodshed" is a song about the horrors of mass killings. The idea to write about this theme was inspired by a real-life event that occurred in 2015 when a premeditated massacre took place during a live music concert in Paris, France at a venue known as the Bataclan Theater," explains singer/guitarist Rick Rangel. "We played a show at the Bataclan Theater a few years before the attack took place and had some amazing memories playing there. The day that the massacre happened, I felt a great deal of shock and grief, I kept thinking about the bands and victims and how it could've happened at our show. The lyrics are a brutal reminder that this can happen anywhere at any time."