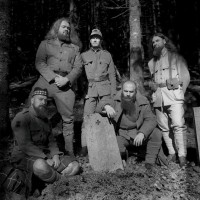 Blackened death/doom metal visionaries 1914 are all set to release their third epos, Where Fear And Weapons Meet, tomorrow via Napalm Records. After smashing their massive first treat "...And A Cross Now Marks His Place", feat. none other than Paradise Lost icon Nick Holmes, followed by scorching "Pillars Of Fire (The Battle Of Messines)", the Ukrainian WWI experts now reveal the secret of their third single "FN .380 ACP#19074", alongside a thrilling lyric video.

The track breaks in with a majestic yet intimidating orchestra, heavy guitar lines, thunderous black metal drumming like a blaze of gunfire and raw vocal power. It reflects the assassination of Austrian Archduke Franz Ferdinand and his wife 1914 in Sarajevo, an event that caused the outbreak of World War I.