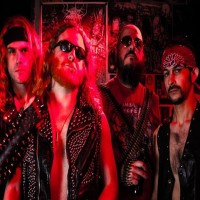 Seax, Massachusetts-based heavy/speed metallers, are nearing the completion of the work on their fifth long player, the successor to 2019's Fallout Rituals. The new music output is currently in the mixing process.

Comment from Seax: ''Our 5th album is being mixed and will be sent for mastering in the next couple of weeks. Like on our previous albums, mixing is being done by Eli Firicano. Drums for this album were recorded at Sonic Titan Studios with Brian Westbrook. Everything else was recorded at Metalfilth with Eli Firicano. Expect release later this year, both on vinyl (Diabolic Might Records 666) and on CD (Iron Shield Records)."