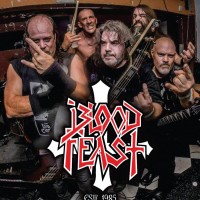 Blood Feast members Adam Tranquilli (guitarist) and Tom Lorenzo (bassist) were recently interviewed by 69 Faces Of Rock, revealing Infinite Evolution as the title of their follow-up to 2017's The Future State Of Wicked, which is 98% completed and will be accompanied by two videos, though no release date has been set yet. The record will also be the first since 1989's Chopping Block Blues to feature original vocalist Gary Markovitch, who has just recently rejoined the band.