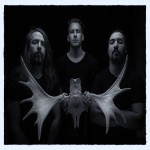 After the recent signing with Willowtip Records, Swedish melodic death/prog metal act An Abstract Illusion now announce the release of their sophomore album dubbed Woe. Due out September 9th 2022, it was mixed and mastered by Robin Leijon. For a preview give a spin to the "Slaves" track.

Band about the album: "This journey started in 2017 and we couldn’t be more excited to finally share this news with you all. The album was written as one 60-minute song which has been divided into 7 tracks and will feature our own brand of atmospheric progressive death metal, with influences from black metal, progressive rock, electronica and shoegaze. The over-arching concept for the album is how groups, people or institutions oppress others they perceive as beneath them, which is a tale as old as time."