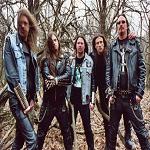 More fine details have been posted on the Myspace blog of recently split Chicagoan extreme metal band Usurper. In November it was announced that a 10th anniversary re-release was in the works for the group's critically acclaimed CD EP 'Threshold of the Usurper'. Here are the specifics straight from the band's fingers:

"Greetings Warriors of Iron and Rust! This is just a quick update on the new Usurper album slated for early January 2008.

Actually it is not really a new album, it is a re-issue of our long out-of-print "Threshold of the Usurper" MCD. It does however have 2 unreleased tracks in addition to new killer artwork from JUHA VUORMA (Usurper: Skeletal Season/Autopsy fame), as well as never-seen-before photos, a 16 page booklet with extensive liner notes, and a new interview with founding members/songwriters Rick Scythe and General Diabolical Slaughter. This is a must have for anyone who followed Usurper over the years.

It will be released by Primitive Reaction Records (Finland) on CD and gatefold vinyl, and there will be a limited edition of 150 CDs and 50 vinyls that we will sell right here on http://www.myspace.com/usurpermetal which will be individually autographed by founding members Rick Scythe and General D. Slaughter."

The tracklist posted in the November announcement is as follows:

Usurper decided to disband around the end of August 2007; their official statement can be found here, along with a much longer explanation from the perspective of guitarist Rick Scythe.