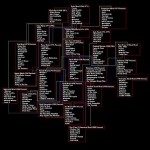 When you were a kid, did you ever collect anything? Did you ever collect one thing, but then organize it down into sub-classes of that same particular thing? Take for instance, marbles. Marbles are all one thing, but there are many different types, you could break them down by color, type, size, etc. Then maybe you could even break it down FURTHER! Like by "colored types of sizes of marbles." Did you ever use this extreme level of organization with any of your toys? Me neither. So why do we do it with our metal?

Obviously, when it comes to the "big hitters" of the metal world, there are a lot of different flavors, so genres do come into play and are a helpful form of organization in that regard, but what is it with metal heads taking it to the next level? Ever seen, Metal: A Headbanger's Journey? In that film there is a killer chart that lays out the ground work of all the "basic" genres that make up metal. You know, genres like classic, heavy, death, thrash, industrial, black, NWOBHM, etc, etc, etc! But even on this "basic" chart, there are still around 24 individual genres of metal. Isn't that enough? Do we need to further break it down? Well, many think yes, and now enters the "microgenre."

I recently got into a little microgenre that people are calling "war metal." Many of my friends and a lot of the Metal Storm community have contacted me and said, "Well, I like the music, but isn't it just 'bestial black metal, but harder and more lo-fi?'" Or, "Yeah it's 'blackened thrash' except they only sing about war. It's not really a new genre, just an old one that's a little different." And this got me thinking... Well, yeah a lot of these statements are true with the exception of little tweaks here and there. Not to mention that one man's "blackened thrash" is in essence another man's "bestial black metal"... but that's for another time... this is about categorization!

A lot of the time it seems like we're going at apples to apples here, I will admit. For instance, wasn't Carcass just Napalm Death singing about butchering limbs? They're still grindcore but they started the micorgenre "goregrind" which has grown to such a large genre now that I am sure no one would argue that it has now upgraded into a subgenre... ouch my head. And Possessed, sure they were a thrash band with more violent vocals but they're still thrash, right? Not something called death metal. And grindcore is just hardcore with blast beats and down tuned guitars. powerviolence is just thrashcore, but more violent? D-beat is just grindcore with less blasts and more hardcore? Blackened thrash is just thrash but with more black? Ugh...

I guess my point is: are we taking it to far? Are we over categorizing the over categorized? And how many plays does it take to get a microgenre to a subgenre, or a subgenre to a genre?! I don't know; I think I will go listen to some "lo-fi atmospheric war-doom powerviolence-metal" to ponder it over.