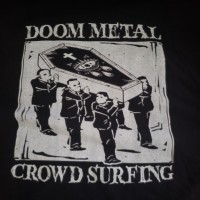 If it would appear the following is making it about me, fuck that, it's most assuredly not. Fuck me. It's just my firsthand experience with some random dude on the internet who became a good friend.

I joined Metal Storm in 2004. I had taken pretty much a decade off from metal after Death Metal got boring and couldn't get over the silliness of Black Metal imagery, content to just listen to the classics. When I awoke from my metal nap, I found MS and joined.

Marcel - or Ozman as he went at the time, though still with that familiar Mercyful Fate avatar image - was one of those I immediately connected with. We were both older, crusty bastards that were around for metal's evolution in the 80s and early 90s. He was hilarious to watch, demolishing the kids who found metal last week yet knew everything.

In 2007 Team MS decided to tap me on the shoulder and offer me an internship in Metal Storm Towers and I got to know him (and the fellow old timers) much, much better.

To a lot of outsiders, he was a crusty bastard.

Once you connected, it was clear he was a teddy bear with a heart of gold.

I was never into Doom. It was slow. Boring. No explosions. Boo. But he kept nudging and pushing, eventually serving up Warning - Watching From A Distance. One afternoon, reading some Hemingway while drinking red wine with the album on the stereo it all clicked. Much like today, I had (more than) a few tears streaming down my face.

From that point on, I was a full-fledged member of the Marcel Kool Kids Doom Club.

As doom went, he pushed a hell of a lot harder than any inner-city crack dealer.

I'd have random packages show up at my house, piled to the brim with random Doom Shall Rise or Dutch Doom Days t-shirts. An Ortega hoodie that I have traveled a good chunk of the globe with. (Fun fact, it was an error, lettering was supposed to be silver. It was white, so someone at the band was displeased. Marcel said "I have a friend who would want that" and sent me the hoodie. When I reviewed 1634 extremely positively, the band posted a link to the review on their Facebook page. Marcel noted 'that's the guy I sent the sweatshirt to.' They responded to the effect of 'went to the right guy'. )

And the music. It was The Good Shit. Not just doom albums, but random and rare stuff. Faal and Ortega rare releases in cool cardboard packaging.

I tried as best I could to thank and reciprocate, sending him t-shirts of US craft breweries and events (yet another shared interest) - even once found a way to special order a bottle of Laphroaig scotch with a personalized label. Amusingly, Procession's The Cult Of Disease was in the first batch of albums, and apparently Felipe Plaza of the band crashed at his place prior to some gig and the bottle was shown off and shared.


I only met the man once.

In 2013 my better half and I visited Munich, Paris and Amsterdam. The later an ulterior motive. Cool city, if you get out of the city center- but figured maybe the big man could make it down to "The City Which Shall Not Be Named". He said he'd take a train in and meet up at In De Wildeman, leading to this exchange:

We had a great time, talking all the great releases of that year, metal in general and just regular mundane shit. The bastard said something in Dutch to our server, and next thing I know he covered eight rounds of quality cerveza and a Chimay cheese plate. About this time the lights came on, bar was about to close and I juked past him to order - and pay for -one last round.

The evening ended with us doing possibly the least metal thing ever. He showed me how to purchase the rail tickets to get to the airport for our flight home. \m/.

Little did I know it would be our last round. Even now, earlier this month I'm planning some mid-life crisis/gap year trip all over the globe with my wife. I carved out 4 nights in The Netherlands, planning to stay in Utrecht just as another excuse to knock back beers and talk metal with my "internet friend".

I've written a bunch of words and referenced a bunch of moments in time above, but that doesn't really do him justice nor fully impart the impact some Dutch Doom Dude across the globe had on my life.

Looking at his Facebook page you can see the measure of the man, the impact he had. Doom and Metal fans from all walks of life and points on the globe chiming in. Add in more bands than I have fingers paying tribute.

He was one hell of a guy.

Well, I'm done pounding out words and weeping. After this time to switch from the doom releases he sent me way back when to some good old 80's thrash, hoist some good craft beer and laugh remembering the funny exchanges, conversations and the good times. I'm pretty sure the crusty Dutch bastard wouldn't want us sobbing into our beers getting all sentimental, but rather celebrating the good, the bad and the funny.

Wherever you are, amigo, whenever we next meet, the drinks are on me.

(Edit after the fact - unpacking found this t-shirt, Marcel laughed when I sent him a link to it back in the day, seemed appropriate here. He'd laugh.)