What a big show tonight in Paris!!! No less than Hatesphere, Ektomorf and the two masters of their respective genres, Dark Tranquillity and Kreator. A pure devilish and aggressive night in perspective for all the numerous metalheads who were there… Let's get ready to rumble!!!
The show begins with Hatsephere, that's a bit surprising because I thought that it was the right place for Ektomorf but whatever; let's go with these furious Danish guys. 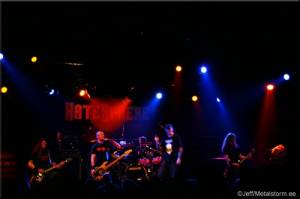 Hatesphere is an excellent band of hummm Hardcore Melo-Death/Thrash metal (ouch…). During some few 30 mins, they will play old and new songs, but especially songs from their last EP "The Killing EP". This band is really good on stage, it was a good start for the night, and I'm a bit disappointed by the fact that they played in first. In comparison with Ektomorf really it was a lot better… 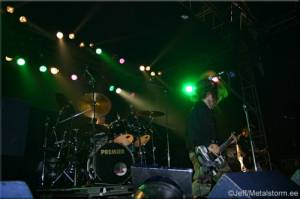 Ektomorf then… They come from Hungary, and this band is not a really bad band but Jesus!!! they are a pure clone of Soulfly, God damn it!!! They played during 45 mins, and as I didn't know them before the show, it was a bit hard for me to enjoy the songs but sometimes I was wondering if they were original songs or only covers of Soulfly… I'm serious; it was really weird to listen to this band because of their real lack of originality… They will have to do something better to convince me… (It was the case of the beer that I drank during this show hehe… :p) 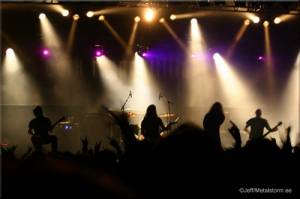 Let's be a bit more serious now, with the great (and for me, the "winners" of the night) Dark Tranquillity. This is one of my favourite bands and I was expecting to see them live since hoo… a long time… The show started after a little introduction with a great "The Treason Wall" from Damage Done and damn what a great start!!! 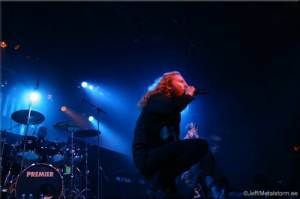 We also had the luck to listen to some old songs like "Punish my Heaven" and obviously a lot from the new album. No "Monochromatic Stains", no "Lethe" and not any songs from Projector (an album that I really like but as I know, Mikael Stanne don't want to sing anymore with his clean voice) but it was really pleasant. The band is really peaceful on stage but you can't imagine how charismatic they all are, it was an amazing show with some amazing fans who were singing all the choruses like crazy people. 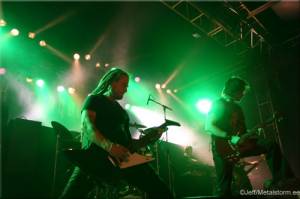 At the end, this show only suffered of its length… No more than 10-12 songs for less tan hour of music… it was really short and we all wanted more… but the headliner was Kreator and you know how it works… You can note however, that a lot of people was there for DT and many Parisians Metalheads left the venue right after their performance… just (really 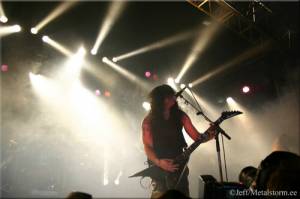 After a little break and one more beer, Kreator's show begins!!! I'm a fan of Thrash Metal, and strangely I only saw Death Angel, Anthrax and Exodus live, no more… When I knew that Kreator was to play in Paris, it was obvious to me that I should be at the Elysée Montmartre this night…. And I was there...
The curtains opens on "To Drop Of The Damned", the stage is cool and the main theme is the excellent cover of the album "Enemy Of God" (with the head, the brain, well you know what I mean). And here we go for approximately 1h45 of aggressively. The band starts to play with the first two tracks of the last album, "Enemy Of God" and "Impossible Brutality", and damn what a blast!!! The musicians, like with Dark Tranquillity," are all very charismatic, especially Jurgen "Ventor" (who will even sing on a song) and Mr "Mille Petrozza who will talk and give a lot of positive messages to the crowd. 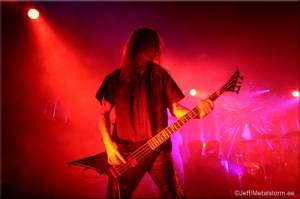 To follow, some killer songs like "Pleasure To Kill" or "Phobia", "Violate Revolution", "Extreme Aggression", "People Of The Lion", "Betrayer", "Riot Of Violence", "All Of The Same Blood", "Terrorzone" etc… All that is really cool but the sound is not perfect (don't ask me why) and sometimes it's a bit hard to hear all the solos for example. That's not a shame but I think that some people like me were a bit disappointed… After 1h20 mins, we got, "Love Us Or Hate Us", "Flag Of Hate" and "Tormentor" for the "encore", a really impressive end, with an amazing and crazy Mille Pettroza.
In fact at the end I enjoyed the show, but on the other hand some parts of this live were a bit boring, a bit long and that's the reason why I say that Drak Tranquillity was better… 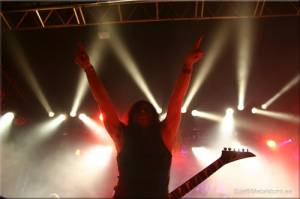 But damn !!! What a great night one more time !!! I'm a lucky bastard who saw in two days 3 really amazing bands (with Angra the day after) and honestly I would like to see such live every weeks…
Luckily I'm in Paris now and like all the big cities, all the bands come here… Next step Kamelot with Epica !!! I will be there for you !!!