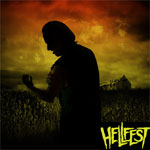 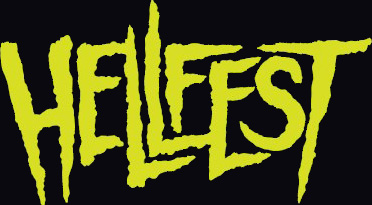 Five years now that the gates of Hell open for 3 days in June in Clisson, France, welcoming more than a hundred bands and thousands of metalheads from all around the world.
Throughout these five years, the Hellfest has successfully become one of the major metal festivals in the world, in spite of a growing competition and smear campaigns from religious extremists.

The reason behind this success is probably that Hellfest is not just another metal festival, it has an identity of its own: A visual identity that shows from the promotional campaign to the decoration of the festival ground and the medieval city of Clisson itself, and of course a musical signature through a rather eclectic choice of bands, including many big and popular bands as well as cult underground acts that you don't get to see at your average concert venue. This identity remained untouched throughout time mostly because it has always been carried by the same people since the beginning, all sharing the same love for extreme music.
Have a look at the flyers from 2006, 2007, 2008 and 2009 so you can judge by yourself

A brief summary of the previous editions
At Metal Storm, we've been covering the event since 2007 and we can attest of the constant progress in the organisation of the festival. We were all doubtful after our first stop at Hellfest because a cataclysmic weather revealed a serious lack of preparation. Clearly, the rain risk - the nemesis of every open air festival - had been understimated, and probably the number of attendants as well. Therion's mainman even stated on stage that "in 20 years of Therion, this is the worst organisation we've seen", cause of the rain, the delay and probably some behind the scene stuff that we don't know about. Nevertheless, we had a very good time and made great memories, the shows were excellent (Cynic and Atheist!) and of course the best was to hold a small "Metal Storm meeting" (yeah, Hellfest was already a very international event at the time).

The curse was lifted for the next two edition, in 2008 and 2009: To sum up, it went on really great under a bright sun and the organisation improved a great deal, leaving the amateurish feel of the previous editions far behind. In 2008, the medium-sized stage became a second main stage, and in 2009 the Rock Hard Tent was added to reach a total of 4 stages, plus the Metal Corner by the camping site, the Extrem Market, a few attractions (a catch ring, a skate park, the ball of steel and the fuel girls, etc.) and more drink stands including one that sells wine (Hellfest vintage). More toilets too! If you want to know more (and you do) I recommend that you read the concert reviews we wrote.

Hellfest 2010
This year, Hellfest is calling out all the zombies of the world to meet at Clisson on June 18/19/20. Well, not "all" in fact, since only 20.000 tickets per day will be delivered. While it seems obvious that this decision is mainly due to the size of the festival area, including the camping site, it also means the event will keep a rather human size (as human as a zombie can be). This is very appreciated and from what can be seen on the map, they also want to leave more room for us to wander through the festival ground: First, the Extrem Market will be moved to a more convenient place and should also be bigger than ever. The same way, the "Electrik Circus" - the tent where most animations were last year - will be removed but this will not impact on the festivities since the organisers will improve the Metal Corner (in the camping area) instead: a big screen to watch metal movies (The Story Of Anvil, This Is Spinal Tap, etc.) in the morning, then the concerts on the main stages as well as a few games of the Football World Cup! Of course, even if it's not a 5th stage, the Metal Corner will host a few concerts, DJs and various contests. Campers be ready, the Metal Corner opens on Thursday 17th!
One last improvement to note before we switch to the bands: The Hellfest beer (and even more toilets)!

So now onto the music with the lineup of this 2010 edition. Of course I can't make a detailed list of all the 115 bands scheduled to play on the 4 stages during the 3 days of the festival, so check the complete running order and comment on all the bands I will not mention... Because I could write about Carcass, Nile, Bloodbath, Decapitated and Behemoth (they finally found their way to a main stage!) that death metal fans already know and won't miss. I could also evoke all those cult black metal bands that are Marduk, Dark Funeral and Immortal. Thrashers would like me to mention the names of Slayer, Exodus, Tankard, Evile, etc. But I won't, and instead I choose to put forward the highlights that make the Hellfest 2010 unique:

On the Saturday and Sunday, the Mainstage 1 will be dedicated to hard rock with the legendary Kiss (they'll close the fest and since it will be their only show in France this year, be prepared - and read Barry's review of their performance at Download 2008), Alice Cooper and Motörhead, assisted by bands like Twisted Sister, U.D.O., Ratt, Airbourne (the impressive revelation from 2008) and their fellow countrymen Electric Mary, and more!

Also, Hellfest always made sure to welcome hardcore bands and this time they're proud to have the "Big Four Of New York Hardcore", with Biohazard and Sick Of It All (definitely not sick at all of playing in Clisson) on Mainstage 1 on Friday, and with Agnostic Front and Skarhead under the Terrorizer tent on Saturday, along with Sworn Enemy, Born From Pain, etc. But the biggest event in the hardcore field will probably be the performance of Jello Biafra and the Guantanamo School of Medicine: fans of the Dead Kennedys will appreciate.

Another genre that is often underrepresented and misinterpreted is stoner (and the whole "desert rock" thing) and again, Hellfest will be THE place to be for fans of the said genres. Reason: John Garcia plays Kyuss, Mondo Generator, Yawning Man, Brant Bjork And The Bros. Looks like all the Kyuss family will be there!

I could go on like this for longer, so to finish I'll just draw your attention towards reunited Godflesh (this will be their only show in Europe), UK's Doom (reunited, they wanted to play at Hellfest!), Count Raven (the Swedish doomsters, back with a new album after 13 years), Fields Of The Nephilim (probably the first appearance of the gothic legend in France in about 20 years), Deftones (15 years after their debut Adrenaline), Loudblast (the French death/thrash legend back on stage after a 4 years on stand-by), Kalisia (those who released the 2009 progressive masterpiece Cybion!) and Nevermore (because well... they're fucking Nevermore!)

Finally, one of the most important feature of any festival is the people you can find there. We already saw that Hellfest intends to keep it "human", just as it was the previous years - meaning it's already quite big but it's still possible to meet up with your metalhead friends and of course make some new ones. I can only encourage you to be a part of it and join the
50 Metalstormers who are already certain to go. Thinking that out of these 50, only 20 are from France is really amazing so let's make sure we don't miss each others. Waste no time and get your tickets!

Thank you for reading and thanks to Jeff, Yoann and the rest of the Hellfest staff.