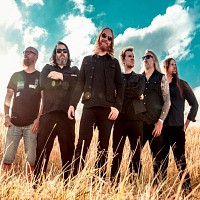 - Are you into nowadays Death Metal scene? What is your opinion about it?

I haven't really been following the scene that much for a lot of years now, so I can't comment too much about it. I think that the basic situation is like it used to be; there are a lot of good bands as well as a lot of bad ones. We play our own music without paying much attention to what other bands are doing or what the current trends in the scene are.

- You have been touring worldwide for a veeery long time presenting "Damage Done" album, are you tired? Or do you still want to continue rocking?

Touring can be very tiresome at times. The playing part is always great, but there's so much waiting and time being spent just traveling in a bus and being totally bored. It's very demanding being on the road for longer periods of time, so I'm personally pretty happy that the touring for this album is over.

- I think "Damage Done" has been a very important album for you, you got the praise you deserve? Are you satisfied with the results of "Damage Done"?

Yes, we're very satisfied with both the album itself and the response and reviews it has recieved.

No, I wouldn't say that. It's impossible to pick a specific period out and call it the most important one since our position today is a result of what we've done in the past. During 2002 and 2003 we've done a bit more touring than usual, and we've undoubtly been gaining more popularity as a result, but I don't consider popularity to be the most important thing about playing in a band anyway.

A lot of things, obviously. When we wrote the "Skydancer" material, we were 17-18 years old kids, and now we're nearly 30. During that period, most people change a lot in pretty much every aspect, and of course the whole scene is very different now from then. Back in those days, bands were trading cassettes, printing flyers and sending out tons of letters every week in order to promote themselves, but that tradition is probably dead nowadays.

- Do you think that in following releases you are going to include clear vocals chords? I mean, like in "Projector". You received some bad critics, but in my opinion it was really cool.

Well, it all depends on the nature of the music. There isn't any point in including some clear vocals on an album just for the sake of it, in order to make the fans happy. That would be a total sellout. If we feel that the music demands clean vocals, we'll use it, and I'm pretty sure that there will be more of them at some point in the future.

- Where does Dark Tranquillity find inspiration for their lyrics?

Inspiration can come from just about everywhere; books, movies, events, relationships, intoxication, music... Anything that somehow affects you is a potential source of inspiration.

- This month Dark Tranquillity´s first live album, called "Live Damage", is going to be released, is a new period starting? Tell me something about the live-album?

Well, it's not a live album as such, but a live video, to be released on DVD. Basically, we got an offer to do it and thought it'd be a nice experiment. Apart from the "World domination live" video and compilation CD that was released in 1998, we haven't had any official live releases so far. Since we now have a different line-up, it makes sense to put out a live documentation.

- Which are Dark Tranquillity´s plans for the future?

We'll basically focus on writing songs for the next album. There will be some festival gigs during the summer, but not too much.

- Dark Tranquillity was formed back in 1993, is hard being still alive? Ten years later? How do you achieve it?

A small correction; our first album was released in 1993, but the band formed already back in 1989, so we've almost been together for 15 years now. Four of the five original members are still in the band, which is very rare. There is no bigger secret; we work very well together and there are no huge egos in the band, so the atmosphere has always been good and creative.

- I know that apart of composing music you really are into another kind of art: painting. You are very requested, "Callenish circle", "Enter my silence". Where do you find your inspiration? Please tell me something about this.

I was interested in drawing and painting long before I began listening to music or playing the guitar, and have been working as a freelance graphic designer for 4-5 years now. After the release of "Projector", I began getting requests from lots of different labels and bands. I do lots of other stuff as well, but obviously the album covers are what's most visible in the metal scene.

- Want do expect about Metal Mania festival in Spain? (I'm Spanish and I think that this festival is going to kick ass!)

It will definetely kick some major ass! There are so many huge bands on the bill, so I'm sure that there will be a lot of people. The Spanish audience have always been very good for us, among the best in Europe, so we certainly have high expectations. We're the opening band on the sunday, but hopefully people will have recovered from the festivities the day before and can get up in time for our gig.

- Feel free to say something to your fans?

Well, thanks for reading this!