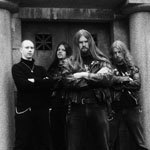 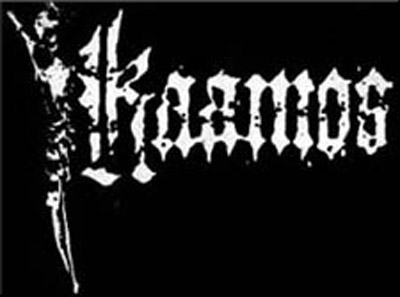 Swedish Death Metallers Kaamos newly released their second full-length album "Lvcifer Rising (Review here!) and did also contribute on our Follow the Storm Compilation Vol.V (March), so I also took the opportunity to get a few of my questions answer, it contained everything from the new album to belief and lazy evenings!


- First of all, thanks for taking some time to answer my questions, I hope you'll find them good enough to answer.
Then, would you mind introduce yourself and your band for our readers?


Kaamos started out 1998 as an idea which later transformed into a full band. The reason and only purpose we have is to play and perform DEATH metal true the spirit of bands as Possessed, Autopsy, Morbid Angel, Grotesque, Sadist Intent unt so weiter. So far we have released a 7", a 10", a demo and two albums. Line up is: Karl vocals and bass guitar, Chris, drums, Konstantin, guitar and me Nicklas also guitar.


- You've recently released your second full-length album "Lvcifer Rising (Candlelight Records), how do you feel that the press and the fans has received it during this first month?
Is the reaction better or worst than after the release of your debut ("Kaamos")?


It's hard to say. I would like to say better but that might have something to do with the fact that it was quite awhile now since our debut and I don't recall all reviews. I know we overall had a very good response for our first effort and we see it now again with "Lucifer Rising". The biggest difference is that more people know about Kaamos this time around. 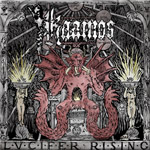 
- How was the recording of "Lvcifer"? Did something worth telling happen or did they just go as planned?

Nothing ever goes as planned now does it? There was one incident where the tape recorder broke down and we feared that it was going to destroy the tape. But it didn't. It was a really relaxed recording session and we just focused on putting our songs on tape and get the hell out.


- I guess many could wonder if the album has a concept/theme about Lucifer (or something else) or is the album just named like that and has ten individual songs?

There is no concept in the traditional meaning as a "concept album" like for instance King Diamond. But there is a strong connection between the title and the songs and lyrics. The Left Hand Path. 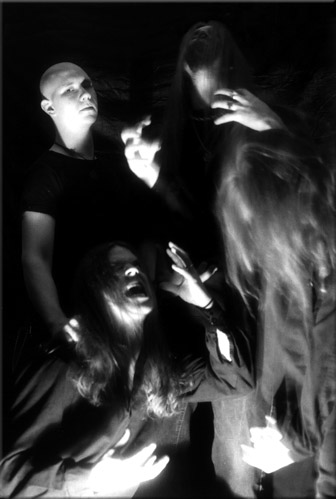 - When Kaamos is working on new material, who's do what exactly in the band (during song-writing and deciding big issues)? And how are you building up new songs?

Ehm? Chris does the drums, Karl the bass and me and Konstantin the guitars? hehe. Nah, seriously we usually start out with one or two riffs or ideas and more or less work our way forward from that. The idea can come from any of us. Then we try putting into the song what it tells us to. Much material and ideas get discarded from an early stage but we can also throw away a complete song after some time if we feel it wouldn't represent Kaamos properly. Probably Konstantin is the biggest creative force but on the other hand it wouldn't sound like Kaamos without everyone else contributing with bits and pieces here and there. At the end of the day we all need to be satisfied.


- A thing that I noticed pretty early when listening to "Lvcifer Rising" was the guitars, sometimes I got this feeling that those would fit better on a Doom/Death album rather than a clean Death album (nothing bad against them, I like it very much). Do you agree or do you just think I'm a bit mad if I say that they are a bit slower and have more melody than usual Death Metal guitars?

Funny enough it's not the first time we get the "doom" guitars comparison. I don't agree but I don't mind either. I don't know what you mean by usual Death metal guitars. Perhaps we use less distortion and we don't have any effects what so ever. Just a good tube amp sound. In a way vintage sound. If you compare to early Morbid Angel, Unleashed, Autopsy in think it sounds very DEATH metal and very Kaamos.


- How was the time between when you started to work on "Lvcifer" and until it was released? I guess it was harder and more nervous this time, to work and release your second album and your debut?

Nervous? not really. We didn't feel any pressure. The song writing is an ever going process with us so it was not like we took a break and then said: "Hey, let's make songs for a new album". As long as we are satisfied there is no need to be nervous. Once you embark into the swamp that is the music industry people will always have opinions about your sound and songs. As long as we stay true to ourselves it can't go wrong. If people like it fine. If they don't then I probably won't get to make another album because it doesn't sell? But that's ok. I'll just go back to making demo tapes because Kaamos doesn't make musick to record albums we play DEATH metal because we have to.


- I guess the reason why the album is spelled "Lvcifer" instead of "Lucifer" is because you have some kind of interest in Latin, right? Or does the "v" mean something special for you?

You're right that "V" comes from Latin and that's why we use it. But I wouldn't say it's incorrect to spell with "U" either. Hell I do it all the time. It has more to do with aesthetics.


- What will happen now, when the new album is released and all? Will you go on tour or just enjoy some free time before starting to work on your third album?

Free time does hardly exist for us. Since the release we have been quite busy with promoting the album with interviews and some gigs. No tours are planned but we will do some festivals during the summer and some one off gigs both in Sweden and Europe. Best way to find out about our latest trickery is to visit www.kaamos.nu 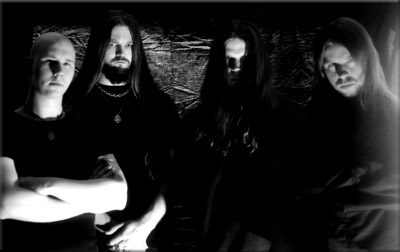 - You're featured on our own Online Compilation this month (March 2005) and the chances that someone will comment are pretty big, and someone did comment your song ("Black Revelations"), and he wrote:

"Kaamos - Black Revelation, this track sounds like a missing song from Cannibal Corpse's "Butchered at Birth" album, you can tell it's been a huge inspiration for them on that track."

Do you think the guy is telling the truth? Or how do you as an artist react when you read something like this?

This guy REALLY needs do double check his preferences. Obviously he hasn't heard enough DEATH metal do have the competence to comment a band like us. Still it's his opinion and he's entitled but I can't take a comment like that seriously. Anyway, we have been compared with so many bands that nothing surprises me anymore. It gives us something to laugh about when we meet at least.


- Now I thought we could leave the band and the new album behind for a while, and start knowing you a bit better, with some shorter questions.
How would a close friend of your describe you, do you think?


Manic depressive with a hint of split personality


- When you're not out playing music and slaying metalheads, how do you prefer to spend an evening?

Reading, drinking? a movie perhaps. I stay much at home by myself.


- I guess the music isn't giving you enough money to bring food on your table everyday, so what do you do besides playing in Kaamos, to earn bread and butter?

We all have regular jobs. Nothing to exciting really.


- What influences to you have?


- Your five favourite albums are?

Tough one but these I worship.


- I was thinking of bringing this interview to an end, but before closing the chapter I though I would give you the word, where you can take up something you think I forgot to ask or just send a word to the fans, or whatever you feel.
The word is yours.

Kaamos thanks you for you interest.


- Thanks once again for answering my questions! I wish you and Kaamos the best of luck in the future, and I hope to hear many more fantastic albums from you in the future!