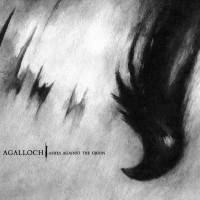 One of my favorites on the album. It is a nice opening track that reminds me of the trip to Port Angeles, WA where I wrote it.

This one evolved quite a bit and ended up being a lot different than on the demo. We almost scrapped this song entirely but the album would've been 10 minutes shorter without it. I thought it had potential so we re-worked it.

03. This White Mountain On Which You Will Die

One time I drove to the Timberline Lodge, which sits half-way to the summit of Mt Hood. It was night but I could see the faint outline of the enormous snowy peak looking down at me. It had this quiet, majestic, and slightly foreboding presence to it. I wanted to capture the feeling it exuded that night somehow with music so I described it to Chris and we worked together on this short ambient piece. It took a couple attempts but I think we finally found the right feeling and the piece became this segue-way between "Falling Snow" and "Fire Above, Ice Below".

I actually like the demo version of this song more. The middle section is one of my favorite moments on the album but, other than that, I feel that something got lost in the transition from the demo recording to the album recording. Needless to say, this is probably my least favorite song on the album.

05. Not Unlike The Waves

Another song that evolved a lot. I think this is the perfect representation of Agalloch in 2006.

Another ok song. Not one of my favorites but it is more of an intro anyway…

I think this is the best example of post rock meeting black metal. I like the build, the ebb and flow, and the climax.

This was the first piece of the trilogy to be written. Chris approached me with this drone thing he was working on and I absolutely loved it. It had to be on the album somehow. So I used it as inspiration to build the rest of the trilogy. Most people seem to think we put it on the album as filler but it is actually quite the opposite. Without "The Grain", the entire "Fortress" trilogy wouldn't exist. I also sent "The Grain" to Tolonen to inspire him while drawing the charred, falling bird that adorns the slipcase.

Posted on 12.09.2006 by
Dream Taster
Bringing you reviews of quality music and interesting questions such as: