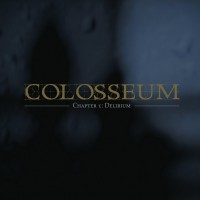 01. The Gate Of Adar
02. Corridors Of Desolation
03. Weathered
04. Saturnine Vastness
05. Aesthetics Of The Grotesque
06. Delirium

This was the first song ever composed for Colosseum. I had very clear idea about what I wanted to do. The first riff could be on the album of Dead Can Dance if we'd listen only keyboards and cut off the other instruments. Dark and shady atmosphere anyway. Basicly I've searched interesting atmospheres from the keyboards and built the song around them. The chords of the fast part are in a whole-tone scale that was much used by impressionistic composer Claude Debussy. I haven't ever heard a metal song with this scale, so i guess it's a bit far-fetched and original, but fits to the song anyway. The final part of the song is an old horror-type of riff that really suits to the overall atmosphere. Lyrics have a strong Lovecraftian influence.

Funeral Doom with 5/4 signature in the opening riff and slowly it tranrsforms to an ambientish episode with clean choir vocals, the only part on the album with clean vocals. On the whole the song describes very well the state of stillness, isolation, nothingness, pain, coldness and such. This is not party music, definitely not. The final riff is quite majestic: "Please leave me be within these shades of grey..." "Antakkee miun olla" in Finnish.

Here we have probably the most memorable melody of the whole album. I came up with only two chords with an acoustic guitar and that was the basis for my inspiration. I built a melody around these chords, added a couple of more chords and there it is. Rest of the song was gathered together with keyboards once again, building some guitar melodies around them. Lyrics go very well hand in hand with the music. Such a cheerful combination of negativity and negativity.

The first riff is reminiscent of Yearning stuff, but I'm very satisfied with it. Some neo-classical chords composed with an acoustic guitar, then playing those chords with keyboards and adding different distorted guitars on the top, leaving the original acoustic stuff off. Same method has been used before, it's just a way to arrange. The ambient episode and the final riff go again in quite unsusual 5/4 signature, but it sounds good. Lyrics are strongly influenced by the feeling you get after spending a night in jail after a "Hard Days Night". There's some pain and suffering there, naturally. My Engl Powerball has been drinking, NOT me!

5. Aesthetics of the Grotesque

Many have regarded this one as one of the best songs on the album. It's very atmospheric and the ending of the song is quite impressive. The song has a bit of a feel how Shape of Despair would sound like if they would play slow enough. If someone would like to tell me what the lyrics are about I'm very pleased to hear. I myself have got quite little knowledge about that issue.

This is a bit more aggressive song compared to the rest of the album. There's some dissonances and tritone used that go very well with the actual subject of the song. It's ghostly, eerie, ghastly etc ad infinitum. Dissonance will always brighten you up, it's one of the treasures worth cherishing in life. Well, this song is the description of your worst nightmare coming to life and it turned out quite well. Album has a peaceful ending and the light at the end of the tunnel is naturally the coming train.