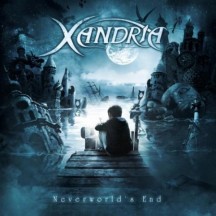 
Do you miss the time when Nightwish was just being… Nightwish instead of Night-Pirates-Of-The-Caribbean-Disney-Wish? Then there are those that still wish Tarja hadn't left in the first place. With all due respect to Tuomas Holopainen's current expansive palette of musical ideas, I do think Nightwish's back catalogue is a major reason why they have such a massive following. Of course, Anette won't be singing in an operatic style all of a sudden and Tuomas loves the current direction he's taking the band to (and who knows, maybe they will succeed in bringing a killer album that will please both old and new fans next time round), so save for the few stuck-in-the-mud stragglers, world plus dog has moved on and lived happily ever after… And the fact is that there are those that constantly return to their worn out copies of Oceanborn / Wishmaster. Here is when Xandria's latest effort Neverworld's End comes into the picture.

Okay. It's rather unfair for another band to hijack Xandria's review, especially when the first paragraph is when most readers will be the most attentive. However, the resemblance, or in more politically correct terms - the feelings evoked - is definitely old Nightwish and it's not necessarily a bad thing as I'm sure Xandria has gained and will gain a lot more fans because of that. It most certainly helps when the musicianship displayed is suitably complimented by a bombastic production. However, the determining factor is the song writing. Unlike most female-fronted bands, the songs are actually memorable without being written just for catchiness' sake. Whereas 97.3% of such bands would lose focus after a track or two, Xandria keeps it tight and proves to be captivating enough all the way*. The tracks gallop along in the right tempo with pleasingly heavy riffs (in relative terms of the sub-genre) and the symphonic parts are prevalent throughout without being obtrusive or honky-tonky (*accusing glare at Wishmaster*) while adding grandeur to the whole experience.

The addition of front woman Manuela Kraller to the ranks of the Xandria camp is probably one of the best things that could have happened to a band after the departure of longtime vocalist Lisa Middelhauve. Some might compare Manuela's voice to Tarja Turunen and I would say Manuela's soprano voice is not quite as rich and lush, though it's very, very close. Had I not been so set on the comparisons, I probably would not notice it as Manuela can definitely hold her own, but more importantly is the vocal diversity she has on offer.

Perhaps it's my general low expectations from me-too symphonic metal bands, or the rather cliché cover artwork and the line-up fluctuations made me rather skeptical, but I am definitely pleasantly surprised by Neverworld's End. There will definitely be some that are unhappy about the lack of originality, but as far as this reviewer is concerned, this is an enjoyable record and a quality release for a sub-genre of music that has been producing too many unsatisfactory albums. Xandria have successfully carved out their own little niche and I look forward to their future releases with hopefully more of a personal stamp on it.


*Notta Benne: aurally speaking rather than in visual terms, though admittedly Manuela does look rather attractive.

Written on 06.04.2012 by
Ag Fox
Ag Fox loves listening to music but is far from being a prolific writer. This corner just shows how territorial he is.
More reviews by Ag Fox ››