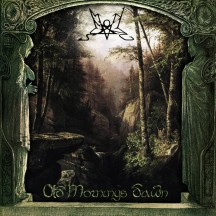 
Rejoice, my metal brethren and fellow LOTR enthusiasts! Earendil has persuaded the Valar with his Silmaril to make war upon Morgoth for the sake of Middle Earth, casting him beyond the Door Of Night into The Void for all eternity (yeah, that was added in there for the nerds like myself that've actually read The Silmarillion). Tolkien references aside, Summoning's new album, no doubt one of the most anticipated releases of the year, is finally upon us, and from the very first moments of its music the band make it quite clear that the 7 years of waiting since Oath Bound back in '06 have been well worth it for 2013's Old Mornings Dawn.

So, let's just get right to what's no doubt on everyone's minds: how does this new chapter in the Summoning odyssey match up to the rest of their discography? Well, my elf and ent friends, get ready, because Old Mornings Dawn may very well be the catchiest album Summoning have yet put out. This may not seem like I'm saying much, really, because the band have always created memorable instrumentation with their keyboards and horns, but something about the formula this time around seems to just have much more of a hook to it than before. From the brief introductory opener "Evernight," to the main riff of "Flamiffer," and even the percussion on "Of Pale White Morns And Darkened Eves," Summoning's music on Old Mornings Dawn comes across as a lot more groovy and riff-heavy than before. The drums are what really keep this rhythmic pace going, Old Mornings Dawn definitely being one of Summoning's best albums in regards to drumming as well.

Other than that, it's the same epic atmospheric black metal we've come to know and love from Summoning. Well-executed keyboard and guitar parts galore create the usual folklore-ish, medieval type of feel perfect for a LOTR-themed band, especially on "Caradhras" and "The Wandering Fire." In addition, there's also a bit of the band's usual clean vocals thrown into the mix, in the vocal harmony in the middle of "Caradhras," and towards the end of the title track.

So, in essence, Old Mornings Dawn is pretty much like any other Summoning album? for the most part. The groovy melodies the band dabble into on this release give the music a whole different dimension, perhaps unlike any they've ever gotten into before, and this 2013 effort is in my opinion a lot better than the more ambient nature of Oath Bound. Regardless of which is better, however, it's pretty safe to say that at this point in their career, Summoning have built up a very well-respected and well-deserved reputation for themselves with their discography. Few bands have displayed such consistency over the course of their albums, and for this Summoning will surely be remembered once their run is at its end. But that's a point (hopefully) far in the future. In the meantime, enjoy yourselves with what will without question end up being one of the best black metal releases of the year, and let yet another installation in Summoning's Middle Earth-ean saga overtake your soul.

Written on 01.05.2013 by
Apothecary
Comforting the disturbed and disturbing the comfortable since 2013.
More reviews by Apothecary ››