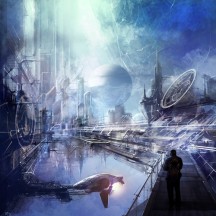 
As a huge fan of writers like Philip K. Dick, Robert A. Heinlein, and Isaac Asimov, I really have to come out and say that there simply isn't as much science fiction-themed metal out there as there should be. Xenomorphs, Higgs-boson particles, and technologically totalitarian futures generally take a lyrical backseat to topics such as war, religion, and joyous stories of using knives for sexual intercourse with your girlfriend. Every now and then, however, we get blessed with bands (Vektor, Oranssi Pazuzu, etc.) that thankfully do feel like tickling the funny bone of your inner sci fi nerd. Italian duo Progenie Terrestre Pura are hitting the scene hard this year as one of them, and their debut album U.M.A. is, quite simply, a force to be reckoned with.

U.M.A. kicks off with the eponymous "Progenie Terrestre Pura," plunging the listener into a beautiful ringing of synthesizers and keyboards, creating a very all-encompassing, spacey atmosphere that sets the stage for the mood of the album. For a second it seems as though this sound is going to dominate, but about four minutes in the tempo picks up into some more aggressive, prog-style rhythms and some black metal shrieks start to pop in. The two then come together in a perfect hydrogen fusion reaction to form an excellent blend of heavy and melodic. The chugging of the riffs and the shrill vocals in the background are only naturally accentuated by the whooshing vacuums of the keyboards and the psychedelic tone of the guitar leads.

U.M.A. is, admittedly, a lot more atmospheric and ambient than it is heavy, and should probably be called "extreme progressive metal" before "progressive black metal" or something of the like. Although this could be a disappointment to some listeners, if it is an issue at all it's a very minimal one. Progenie Terrestre Pura firmly ground themselves in a spacey, instrumental sound with this release, so when the heavy parts do appear, they feel a lot more like extra flavors than essentials that weren't given their proper value. Some tracks on U.M.A. lean more to one side of the equation than the other, but the maintenance of the two for the most part strikes a fine balance.

So chalk up another victory for space metal! Hopefully I'm not speaking too soon on this one, but U.M.A. definitely looks like it'll go down as one of (if not the) best debuts of 2013. The atmospheric and aggressive elements of it always seem to complement each other, and the beauty of the keyboards and guitar leads (see the beginning of "Sovrarobotizzazione" especially) provides the perfect mood to just sit back, eyes closed, and become lost. While not the perfect album, U.M.A. does show that Progenie Terrestre Pura have a lot of room for growth and improvement, and are definitely a band to keep a close eye on.

Check it out on their Bandcamp. If the music and this review still don't convert you then you might wanna give that cover art a good hard stare for a few minutes, and that'll probably do the trick.

Written on 13.06.2013 by
Apothecary
Comforting the disturbed and disturbing the comfortable since 2013.
More reviews by Apothecary ››