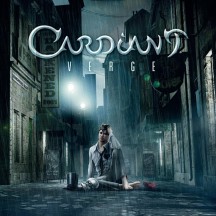 
Never judge a book by its cover.

Cardiant's third opus Verge can be easily foreseen by an accurate look at its artwork: a dark town surrounds a broken man, whose heart has just been metaphorically ripped off, and the band rounded logo dominates the scene. This prepares for a sad, melancholic, sometimes depressing album, with some lamps in the background, both in the cover and in the music, just to make the atmosphere bearable. To know the rest, just press play.

Fourteen minutes and you've already listened to the whole album. No, this is not a pop-punk mini album with a running time of twenty minutes, but the first three songs sum up perfectly the whole release, exemplifying every kind of track contained in Verge.

The album kicks off with "Justice Turns Into Revenge", a wonderful mid-tempo anthem, elegant, masterful, with some enjoyable progressive touches. The second of three is the slower "Thought's Inception", romantic and well-balanced, just to have some rest before the "last" song. "Heaven's Calling", that's also the song chosen for the video, is the classic power metal double kick fast song, with a traditionally Nordic style of chorus, of verse, of song structure... exactly what you do expect from a Finnish band.

And here the album's almost over. Sure, there are still seven tracks, but those are pretty much rough drafts of the first ones. The mid-tempos become slightly repetitive and too easily predictable, while the power pills seem inevitably Stratovarius b-sides, also due to Erik Karhatsu's vocal timbre, too reminiscent of Kotipelto's, but not equally magical.

So, keyboard-driven light melodies, dynamic duets between male and female vocalists, alternation of slow and fast songs, heartbreaking themes about love... Does this remind you of something/someone?

Sure it does. And, damn, this is the real limit of an otherwise beautiful band as Cardiant could be. There's the talent, there's the diligence, there's all the passion in the world, but the inheritance of their previous great compatriots, as Nightwish, Sonata Arctica, or also the less legendary Serenity (an Austrian band with Scandinavian style? Wut? I was sure they were Finnish), is simply too heavy to bear without denying their own roots and artistic ideals.

To sum up: are you a melodic metal addict? Get your hands on this album, it could really be the Verge of this year. Are you already a sad person? Avoid Cardiant like the plague. I don't want the responsibility of depressed teen self-hangings.

Written on 27.06.2013 by
R Lewis
Hopefully you won't agree with me, diversity of opinions is what makes metal so beautiful and varied.