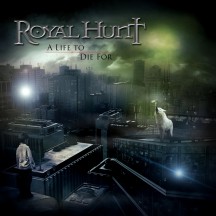 
Royal Hunt's 2011 release Show Me How To Live divided Metal Storm users from Staff. A Life To Die For now unites them.

Show Me How To Live saw the return of well-loved DC Cooper behind the microphone but, besides some good ideas, the whole album seemed somehow uninspired, also due to an unexpectedly weak singer, at least according to our reviewer. Fans, on the opposite, seemed satisfied overall.

But let's quit history and keep it quick and simple: A Life To Die For is a great album, among the best in Royal Hunt's career. After the first listen to the 9-minute opener "Hell Comes Down From Heaven", anyway, I was sure I would have traced the destroying path Milena followed two years ago; a slow, sad and almost irritatingly overextended track, that's what it seemed to me.

And then - wonder of wonders! - something clicked in my mind. I suddenly sank in the gloomy atmosphere of which every song is imbued, a feeling of distance, unchanging and motionless, "as idle as a painted ship upon a painted ocean", that let everything flow clearly while the external world, once so concrete, had gone blurred.

The contrast between the enormous amount of orchestrations used and the electricity of guitar solos, which confused me before, turned into a hunting, breathtaking chase between vigor, fancy and technique; the songwriting, foreseeable that it was, got stirred by hundreds of little and elaborate details that show themselves in a different light at every spin; the choruses, instead of the forced catchiness they menaced (and of which they suffered in Show Me How To Live), became the tracks' pillars, and their many repetitions weren't annoying anymore, because every time DC Cooper's amazing performance managed to enrich them with different tones, intonation.

The conventional instruments, though being some-maybe-too-many-times overwhelmed by the symphonic elements, essentially find their rightful space, not abandoning a single second of the album to boredom and allowing the listener's mind to remain focused for the whole 45 minutes.

Yeah, 45 minutes: if a blemish has to be found in this release, that would be its brevity. Between the two epics that hardcover the album, only five tracks appear, which leaves the listener wanting, desiring, needing so much more. This also affected the 2011 release.

Maybe DC Cooper took some years to get used again to Royal Hunt's melancholic mood, maybe this time the songs were better composed, based on his vocal talent, but it is a fact that this, not Show Me How To Live, is the band's true return to form - and to the roots - and the singer's complete rebirth.

Written on 04.01.2014 by
R Lewis
Hopefully you won't agree with me, diversity of opinions is what makes metal so beautiful and varied.