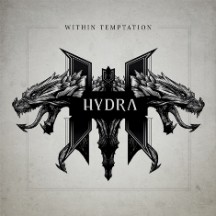 They tested a path of 80's rock and pop influences in 2011, but The Unforgiving brought them conflicting responses. 2014 signals a return to the heavier and more symphonic style we had the pleasure to listen to some years ago, but the soul of the last record hasn't been totally trashed, since the new album Hydra blends tradition and experimentation.

And it's that fearless experimentation which hits the listener in the face already in the starting tracks, disguised as fan-feared featurings. While the work with Tarja Turunen comes quite natural and the collaborations with ex-Killswitch Engage's Howard Jones and Soul Asylum's Dave Pirner can be unexpected, yet not shocking, the one with rap star Xzibit is. "And We Run" is your typical Within Temptation symphonic semi-ballad, until Xzibit brings his performance that, while lyrically questionable, since hearing a "mothaf*cka" in a song of this kind is definitely clashing - is musically awesome. Therefore, making it the most dreaded album track, but one of the probable favorites of every open-minded fan.

With that being said, Hydra is basically a typical Within Temptation album, full of the catchy keyboard-driven melodies that made the band's fortune - and that also brought the most passionate criticisms due to their explicit radio-friendliness.

And while the guitar work could be improved, especially in the sometimes monotonous rhythm sections and in the short, few and low-mixed solos, what is impossible to improve is Sharon den Adel's stunning vocal performance. The co-founder/singer delivers once again with her very own emotional vocals; soft as velvet, though powerful as hell when needed. But that was sure-fire, wasn't it?

Hydra brings back some classic Within Temptation trademarks, as the huge amount of orchestrations which were subdued on The Unforgiving due to the modernization of the sound, the bombastic heaviness deadened in the last albums and, in "Silver Moonlight", the growls that will cause nostalgia in every long-time fan of the early days. But be warned: do not approach this release expecting a pure gothic album a la 1997's Enter; you'll be disappointed.

With Hydra, Within Temptation carry on in their own way, unconcerned of the boundaries imposed by the expectations of that non-constructive part of the audience that would like to hear the same songs recorded over and over again in the same style. This brings to the fact that the problem with this release consists in the close-minded outlook of the metal community, which too often associates the word "mainstream" with "crap", and therefore not giving any real chance to the music itself.

This may not be the best work of the band, but another pearl in the necklace these talented musicians are assembling.

Written on 09.01.2014 by
R Lewis
Hopefully you won't agree with me, diversity of opinions is what makes metal so beautiful and varied.